Clarksville family depicts story of Mr. Bones at their yard this Halloween 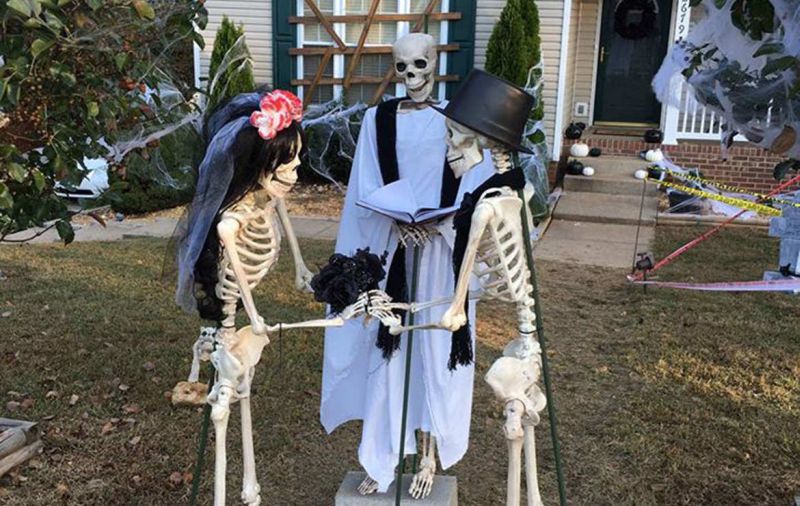 Surprising neighbors with spooky decorations is a great way to celebrate Halloween. A Clarksville family has been decorating their yard with scary Mr. Bones for years now, but this year they have plans to kill their loneliness by adding a whole skeleton family in their backyard along with skeleton pets. Garcia and her six children have started decorating their backyard since October 1, 2016 and they have frequently changed the scene of their backyard to portray the story of Mr. Bones.

They have made a temporary cemetery for creating an interesting illustration of Mr. Bones pulling his bride-to-be out of the grave and proposing her for marriage. Subsequently, they created a scene in which a priest is performing their marriage rituals. These days the skeleton couple can be seen picnicking or enjoying around the yard and fetching with their skeleton dogs. Sometimes Mr. Bones is finding his cat or something in the bushes.

Garcia and her children are getting encouraging responses from their neighbors for such weird illustrations of the skeleton family. They are fascinatingly capturing pictures of these creepy Halloween decorations.

Normally it has its ups and downs like every other neighborhood, but I’m really surprised that this has brought everyone together with their love for it

People are asking her questions about her next plans for the Mr. Bones story. These questions are both encouraging and inspiring for her, but she doesn’t want to reveal the story-line. Neighbors have to visit her house for upcoming surprises.