The outlandish piece will be auctioned by Bonhams next month 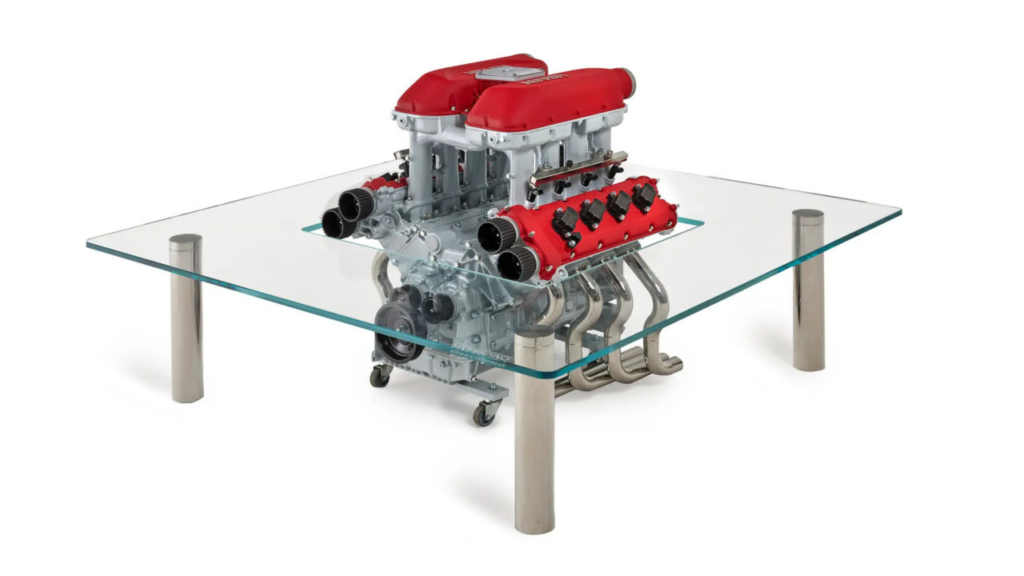 Nothing hooks me up as an exotic coffee table. From its silhouette that adds aesthetic to a room to the myriad of functionality, a good coffee table is always worth a discussion. The table that grabbed my attention is listed on Bonhams for auction and will probably be adding grace to some rich man’s house by the first week of February.

The coffee table has a pretty simple design with a glass surface and metal legs. The bidding for the table begins at $20,500 and is estimated to spike up to $27,000. So, what is it that makes a simple coffee table worth that sum? It’s the Ferrari 360 Modena engine placed at the center of a glass top. The V8 engine adds a pleasing aesthetic to the furniture making it completely outlandish.

The engine however isn’t poised on the glass surface, it instead pierces the tabletop, thus making an ordinary coffee table completely spectacular. Alain Gervadino is the man behind all this mischief. The French artist has made a life out of transforming luxury car engines into exclusive items that fit in a contemporary interior. Gervadino has now incorporated an original Ferrari 360 V8 engine block shell in a coffee table, and it looks ridiculously amazing.

Quirky and completely offbeat, the coffee table measures 55-inches from all four sides and is poised on four polished stainless steel legs. Apart from the engine, the table also features peripheral components of the two-seater coupe. The engine has been decorated in classic Ferrari red and sports silver Prancing Horse badges that add more elegance to the piece.

Also Read Best Coffee Tables You Can Buy in 2022

Not to mention, the engine also incorporates the camshaft and crankshaft pulleys, fuel injectors, and coil packs, which make it evident that the engine was beating inside a beautiful beast back in the day.