By DattatreyaJune 13, 2013No Comments2 Mins Read 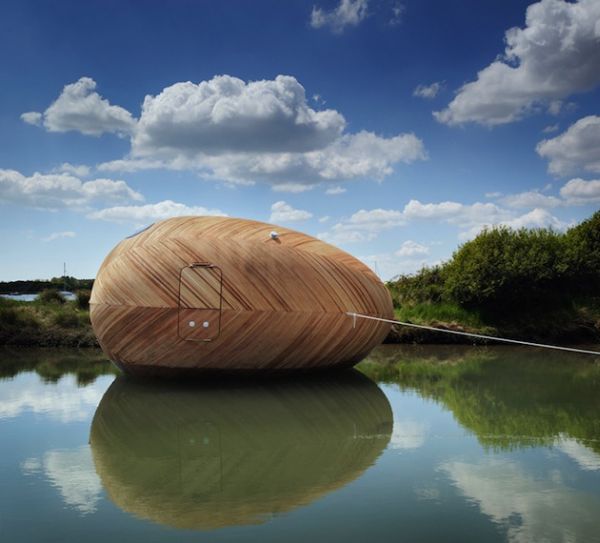 With the more varied evolution of architecture along with the rising costs of living in core urban areas, we have seen a new breed of ‘flexible’ housing solutions that have minimal effect on their surroundings. In this regard, water-based housing is emerging as a credible alternative (in urban areas blessed with adjacent water bodies) to living in cramped sections of land. The above pictured ‘Exbury Egg’ (the collaborative effort of SPUD Group, PAD Studio and designer Stephen Turner) follows the same pattern, albeit not as a housing unit; but rather as a habitable lab unit located on the Exbury side of the Beaulieu River, in southern England.

Touted to be constructed with ‘age-old’ boat building techniques, the habitable Exbury Egg is basically a floating structure that will move up and down with the river tide. This would allow resident researcher/artist Stephen Turner inside the lab to study the ‘littoral zone’ – a part of the river course that is closest to its bank. This study, which would occur for a period of one year, will provide new insights on the effects of erosion and global warming on river bodies.

Finally, coming to its features, the Exbury Egg has been crafted as a singular space with a circular roof window. This space will contain all the bare essentials, like a small stove, shower (in a wet room), a work desk and an accompanying bed. Its energy requirements will be fulfilled by green solar power, while a life link and webcam will allow virtual visitors to follow Stephen’s year-long research and also interact with him.