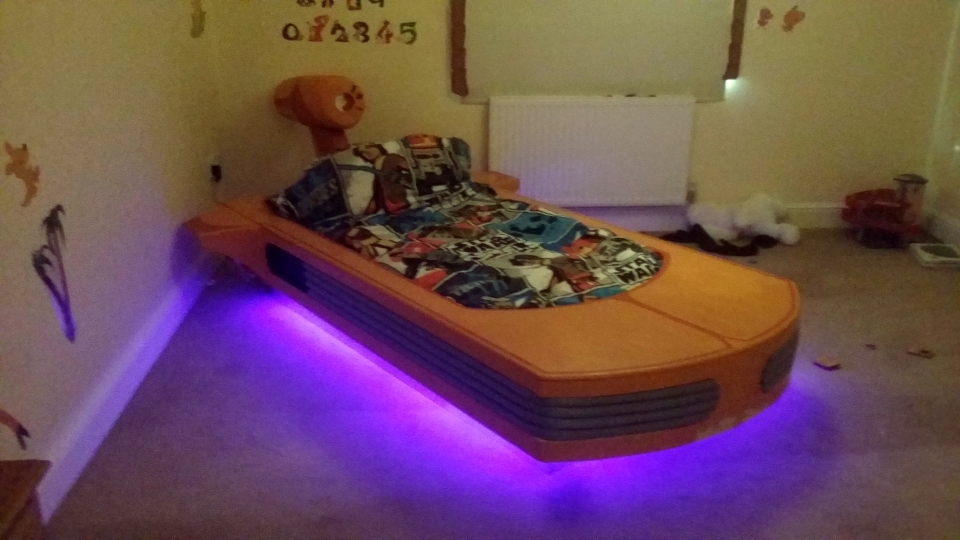 Reddit user Ghostfaceace, an all-time Star Wars fan, has created a milestone by building his son a Star Wars-inspired Landspeeder bed. Ghostfaceace, a builder by profession, has created this awesome bed using some spare timbers and few tins of paint, which is later completed using glowing lights underneath and Star Wars-themed bedding on top.

It took him almost 10 hours across two weeks to complete the task and cost him approx. £100 ($150) for building materials. According to the Reddit user, most of the material used in building the bed was sourced from his previous job. The bed has not only received widespread applause from social media users but also made many parents jealous too.

As explained on Reddit, the top, bottom and internal walls are made from 18mm engineered wood and 2400 x 1200 mm boards, whereas the external walls are made from 12 mm medium-density fiberboard. To make it look floating an inch or two above ground, the base, which is made using 200 x 50 mm planed timber, is fitted with remote controlled LED strips that change colors on press of a button. The silver sides of the bed are achieved by using 40 mm pipe insulation foam.

The bed cleverly replicates the sc-fi hovering vehicle which was first seen in Star Wars IV: A New Hope. So, rather than buying something expensive from store this holiday season, gift your kids something like this and let them cherish it for life.