How About Making Zombie Barbie Dolls for Halloween? 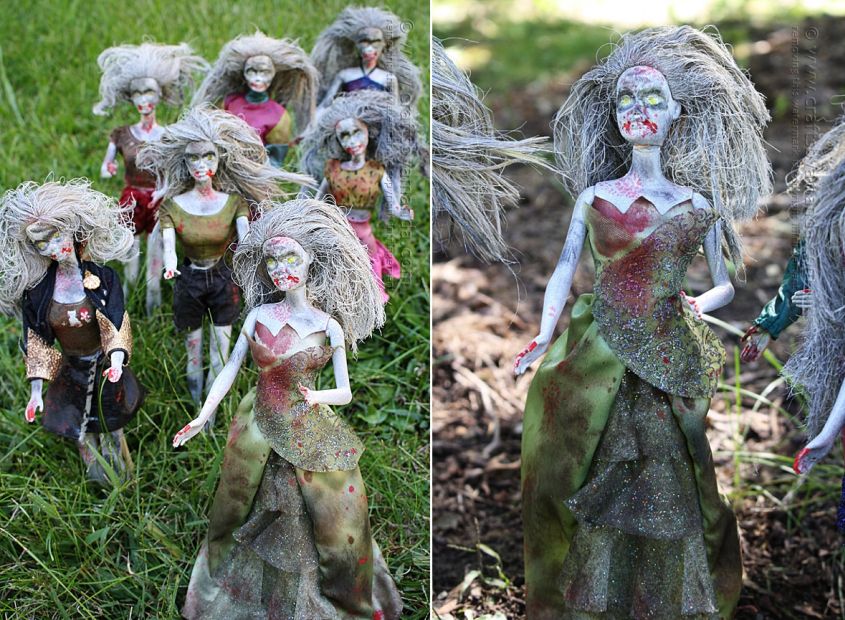 Barbie dolls are usually known for their pretty appearance, but Amanda Formaro of Crafts by Amanda has come up with a cool idea of turning them into dreadly looking zombie Barbie dolls for Halloween. Inspired by The Walking Dead series, she has used spray paint, clothing dye, paint pens, and a few other supplies for the same.

She bought a few yucky Barbies and dipped their clothes into a mixture of orange, blue and red dye. Next, some black and white paint was added along with walnut gel stain to darken the mixture and give the Barbie clothes an even filthier look. All the dolls were spray painted in gray and then in white to make the skin look creepy. The excess paint was dabbed with a paper towel.

The faces were marked with colored paint pens and red paint was added with toothpicks to resemble blood splatters. These zombie Barbie dolls look horrible and would make a frightening display at the front door or on a coffee table. Amanda recommends using Barbie stands to display them, however, she used dowels to make them stand.

Also Read: 25 Quick and Easy DIY Halloween Crafts You can Try in 2018

Making Barbie zombies is a super fun project that kids would also take interest in. If you want full instructions and requirements, see the complete tutorial at Crafts by Amanda.

Related Posts
These Homemade Dog Costumes for Halloween Will Leave You in Awe
By Monika ThakurOctober 6, 2022
Small Apartment Living Tips to Get the Most out of Your Space
By Priya ChauhanOctober 6, 2022
Creepiest Door Knockers to Bang in the Halloween Spirit
By Priya ChauhanOctober 4, 2022
This 30ft Tall Spooktacular Frankenstein Effigy is Dopest Halloween Display
By Atish SharmaOctober 4, 2022
Leave A Reply Cancel Reply