By DattatreyaAugust 17, 2013No Comments2 Mins Read 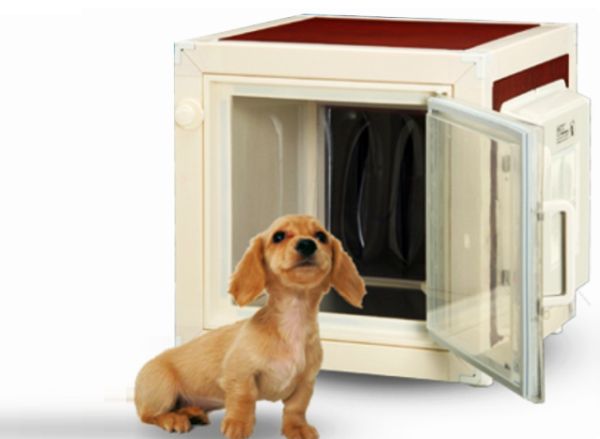 Designer doghouses move aside; the Japanese have once again come forth with their technologically advanced alternative. We are of course talking about a Japanese doghouse equipped with its very own air-conditioning system. Contrived by MRT Corp, a firm known for their sensor based mechanisms, the features of the doghouse’s AC actually employ the physics based attributes of thermal conductivity. In this regard, the designers have utilized Peltier elements that have both heating and cooling functions. The flooring of the doghouse is composed of aluminum plate with high thermal conductivity, which in turn has Peltier components attached to it.

Now, beyond the ambit of technology, the dimensions (in inches) of the air conditioned doghouse are actually quite small – 30 (W) x 37 (D) and 37 (H). This was done to improve upon the effectiveness of the integrated air conditioning mechanism. However, in terms of sheer functionality, the bantam kennel can only cater to smaller breeds of dogs like Dachshund and Chihuahua.

And since we have brought up the subject of the core efficiency of the AC, according to the designers, the doghouse conveniently maintains an optimized temperature which is 10-15 degrees centigrade lower than the room temperature (when cooling is required) and 15-20 degrees centigrade higher than the room temperature (when heating is required). The corresponding energy expended for achieving such results is also very low with the rate being ¥1.5 (around $0.015) per hour in Japan.

Finally, coming to the scope of pricing, the entire air conditioned doghouse will set you back by ¥49,800 (around $507), while the product life is slated to be around 18,000 hours or longer.

Related Posts
These Homemade Dog Costumes for Halloween Will Leave You in Awe
By Monika ThakurOctober 6, 2022
10+ Celebrity Pet Halloween Costumes You Will Love to Steal
By Atish SharmaSeptember 29, 2022
Furniture Designed for Pets and Humans Lets Both Live in Utmost Synergy
By Monika ThakurSeptember 27, 2022
This Stylish and Minimal Stool Doubles as Pet House
By Atish SharmaSeptember 15, 2022
Leave A Reply Cancel Reply