Meet Kenai, the First Off-Grid Tiny House With Kitchen in the Loft 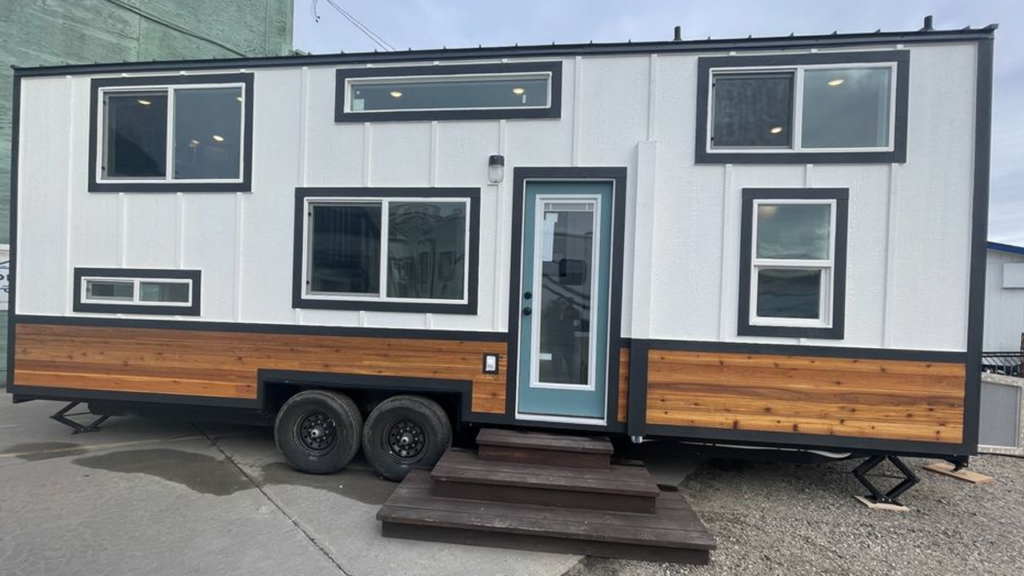 We are used to the idea of tiny houses incorporating a bedroom or living room in the loft, but I’ve never come across one with a loft kitchen. Idaho-based tiny house builder Tiny Idahomes is sailing against the wind with the introduction of the first-ever tiny house with a kitchen in the loft.

Measuring 28 feet, the Kenai Tiny House (as it’s called) boasts a beautiful reverse loft model that will grab headlines in the coming weeks. Finished in a two-tone exterior, Kenai looks like a traditional tiny house from the outside. But as you step inside, you are graced by a unique layout that can boggle the mind.

Inside the tiny house, there is a double-sided staircase (with storage) for those that do not want a ladder to climb up to the loft. The ground floor functions as a living room and is equipped with a sofa. We also spot a power outlet on the wall facing the sofa, which is presumably where the television would be mounted.

The real magic, however, lies in the gorgeous L-shaped cooking space, which is in one of the two lofts incorporated within the tiny dwelling. The kitchen looks spacious for three to four people to stand simultaneously. It is stocked with all the necessary appliances ranging from a microwave to a fridge. Featuring a stainless steel sink, a propane range with a three-burner cooktop, and a number of storage options, Kenai’s kitchen looks top-notch, to say the least.

Under the kitchen, there is a small well-lit room with multiple windows. These windows allow natural light and cool breeze inside, keeping the place well-ventilated. This could either be a place where you can store heavy equipment or use it as a kid’s playroom.

Also Read: This Tiny House has Suspended Netting for an Additional Bed

Talking of the other loft, the tiny house features a traditional bedroom with a dormer ceiling here. Most tiny houses come with a compact bathroom, but that is not the case with Kenai. It has a full-sized bathroom featuring a bathtub, a porcelain toilet, and a large sink.

Additionally, there is also a washer/dryer cleverly fitted inside a storage section. The founder of Tiny Idahomes, Jesse Collinsworth stated that Kenai is solar-ready and perfect for off-grid living. The model is not listed on the company’s website yet, but Jesse announced via a Facebook post that the tiny house would cost around $87,280.