Book at your own risk 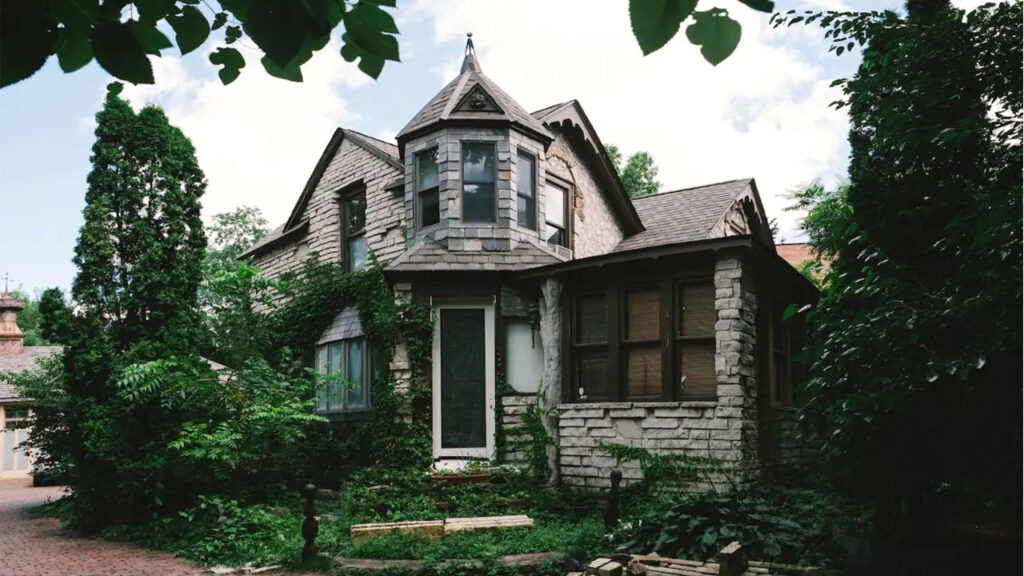 Despite advancements in technology and the evolution of man from hunter-gatherers to farmers, one thing that was common then and now is the fear of the unknown. I am not talking about alien bodies here. I am discussing the soul or spirit of a dead person which we often term as ghosts. While time to time, science has been bursting the myths associated with phantoms, but there are incidents that derail science and make us believe in its existence.

Popular culture has further worked in strengthening ghost theories and added a whole new flick to it. The belief set by the culture has hugely popularized mansions, palaces and bungalows to be haunted, and the credence was further strengthened by books and cinema. Why am I talking about all this? Come on, it’s Halloween season nearing and what better than visiting a spooky place this All Hallow’s Eve?

While renting a palace or booking an entire bungalow may not be feasible, you can experience the existence of ghosts, demons and devils in these ten scariest and most haunted Airbnb rentals and make your Halloween even creepier.

The Black Monarch in Colorado

Haunted hotel industry is burgeoning across the US and all over the world. Amid list of haunted Airbnb’s, The Black Monarch is one of creepiest yet highly popular rental. Based in Victor, Colorado, United States, the Hotel owner rebuilt it from a brothel to rentable space after it was left dilapidated due to a fire incident in 1899. Local legend even suggests that the building is haunted by the ghost of a miner who died in a gunfight. Creepy, right.

Hotel room features luxurious furniture, creepy art, authentic taxidermy, and very real oddities to make your stay full of trepidation. The new hotel owner even quoted to The Guardian that multiple people have seen a woman looking out from one of the hotel’s windows, even when it was empty.

Other than that, strange sounds and moving objects may be a common sight to witness. So, what are you waiting for, book your stay at Airbnb for $119 a room and thank me later, if you are alive and healthy. Just kidding!

Battle of Gettysburg holds utmost significance in American history and the historic civil war farmhouse is an important memoir of it. Based in Pennsylvania, United States, this was the place where causalities of the civil war were brought in and treated. The space is hosted by Stephani who claims that there are many spirits who live there, but they are all harmless.

Well, if you are not afraid of pets and is completely ok sharing kitchen with her, book a room at this place for $109. The host offers you large sunny room with a queen-size bed. Other than that, you’ll have your own private bathroom equipped with shower. Don’t forget to carry an Ouija board – who knows you might be able to chat with one or two kind-hearted spirits.

Do you like the idea of sharing bedroom with a young girl in yellow dress who is apparently a ghost? Well, the legend states, the ghost was the daughter of the previous owner of the property and was buried on the grounds. If you are lucky enough, you’d spot her roaming. This sounds unreal but that’s the fun associated with Halloween.

Moving to the basic feature, the haunted bedroom features a queen-size bed and sitting area. It also features a full shower bath, and also an immediate access to the third-floor porch, with sweeping views of New Orleans which is a beauty to behold. On top of that, the room will have internet access, mini-fridge, and cable TV for you to view a haunted movie to make your night scarier. The bedroom can be booked for $111 per night.

The Manor Master Chamber in Minnesota

What makes a place or villa haunted is not just the legends associated with it but also its appearance. Located in Saint Paul, Minnesota, The Manor Master chamber features a stone exterior that is enough to send spooky vibes to anyone. Voted as the most mysterious house in Saint Paul by the Pioneer Press, the Airbnb has stayed true to the words.

It features tall ceilings and plenty of windows that allow natural light to pass in. The entire house is decorated with oddities and antiques that add even scarier vibe to the place. If you are planning a vacation this Halloween, The Manor Master chamber is worth a try, especially for its exterior. A room or chamber can be booked here for $90 per night.

Based in Troy, New York, the location lies in the heart of Lansingburgh village. There are multiple theories circulating about the place. Most common amongst them are about ghosts wandering the attic and the basement.

Nevertheless, your private spacious oasis feature a haunted bedroom in the second floor equipped with queen-size bed. Other amenities include a shower and an access to third floor attic. If you look at the pictures, the bedroom, gallery, stairs, everything has a spooky vibe, despite the owner making not much efforts in making it haunted.

The place is so raw and natural in terms of horror that one would start feeling cramped just by looking at the pictures, despite it being spacious. The Airbnb can be booked for $295 per night.

Asian Room in the Cemetery Schoolhouse in New York

I bet you all have had the fantasy of studying in a school with cemetery next to it. Located in Hudson, New York is one schoolhouse that could satiate the year’s old desire of yours. Many Hudson River School painters made it their final resting place. The schoolhouse is a collection of Airbnbs and one Asian room here will have you experience fear first hand, if you are fainthearted. The schoolhouse was built in 1900 near one of America’s most historic cemeteries known by the name of The Cedar Park cemetery.

So, what’s the fuss about Asian room? Well, the room was traditionally built around a 18th century Opium Wedding bed and is a fusion of Asian and contemporary design. The biggest highlight of the room is its interior comprising of furniture, pendants and every small to big item that is adding aesthetic to house.

Apart from the magnificent artistic blend, the bathroom and kitchen in the schoolhouse are made out of steel and frosted glass elevating the spooky vibes to a higher note. To some people, it may be spooky and the home of dead, but for me, it’s just drop-dead gorgeous. Asian room in cemetery schoolhouse is rentable for $179 per night.

Older the cottage, the more haunted we assume it to be. Given that, I bring to the list 18th century cottage adorned with antiquities and oddities inside. Situated in Savannah, Georgia, the cottage is surrounded by a forest which makes it even more eerie.

The cottage is filled with antique furniture and regional artwork and finished in pinewood. In addition, Gullah sweetgrass baskets and antique carpets grace the authentic period building.

The cottage includes a kitchen, dining and laundry and spacious bedroom with queen-size bed. There is also an upstairs bathroom, and living room daybed with two twin beds in case you plan on hosting a Halloween party for your close friends. The entire cottage can be booked for $239 per night on Airbnb.

Over 180 years old, this particular Airbnb is an antique house transformed into a vacation rental. As you reach the location, don’t expect it to look or feel a traditional hotel, because it has got some spooky vibes to it. The stairs will creak, the windows will rattle when it’s windy, and you may experience paranormal activity in the house during your stay. I am not even exaggerating, that’s how the current owner actually describe it.

As far as visitor’s comfort is concerned, it is perfect for families or large groups traveling together looking to explore downtown Salem in Massachusetts. You can have access to the whole house featuring a family room, kitchen, dining room, and living room on the first floor.

Other than that, there are four bedrooms with two baths on the second floor, and two small bedrooms on the third floor as well. Overall, it is a perfect abode for family reunion this Halloween and would cost $654 per night. 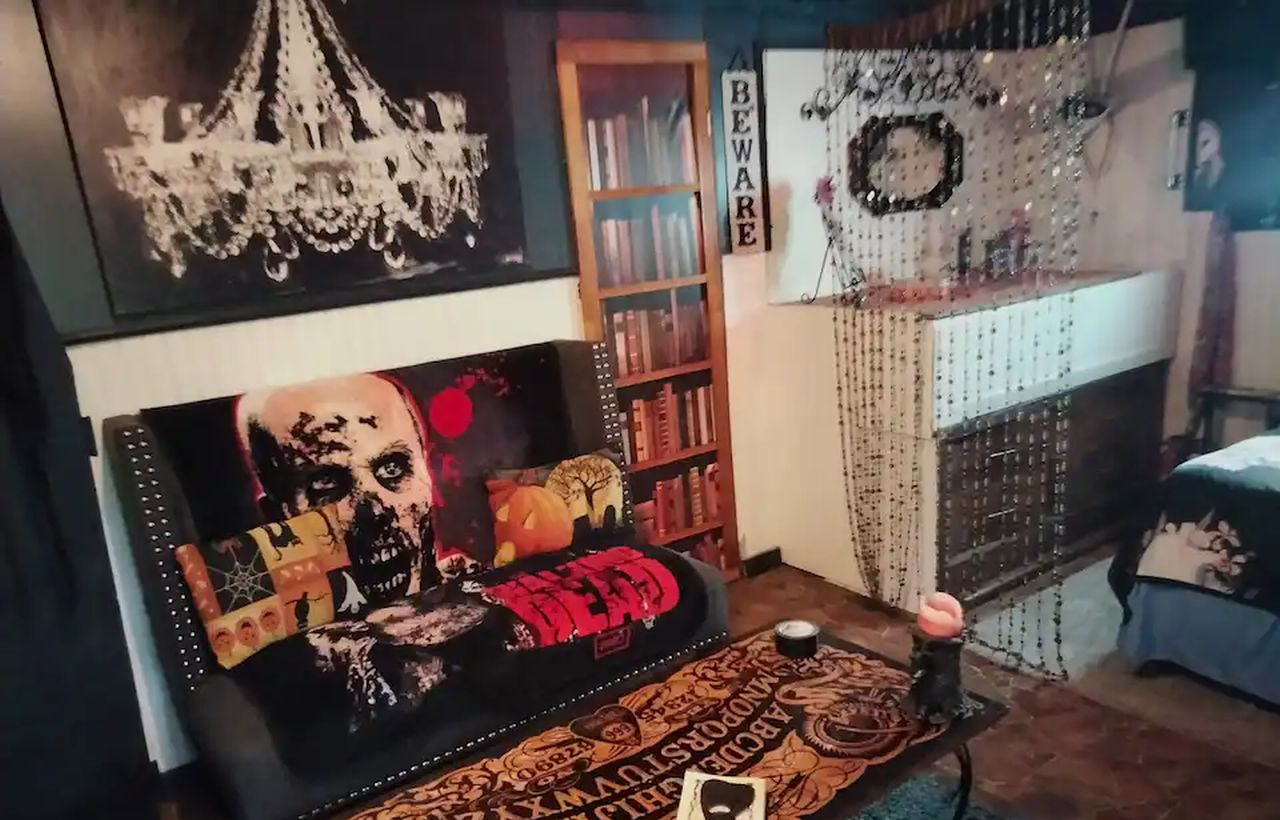 We have covered plethora of tiny homes from across the world but this one is really special. Because it’s super spooky! Don’t expect basic amenities here or you will be left disappointed. It is a small space adorned with creepy items all around. There is an Ouija board table to summon the ghost and a bathroom hidden behind a bookshelf.

The creepy décor is the highlight of the room which features a queen-size double bed. If you ever dreamt of living life downsize and wanted to stay in a haunted tiny house, this is an ideal package for your Halloween. The Airbnb vacation rental can be rented for $62 per night.

Also Read: America’s 30 Most Haunted Hotels You can Stay in for Spookier Halloween

Built in 1737 as a revolutionary training ground, this haunted inn is encapsulated by three mountains and two rivers and also has gardens to sit in. Visitors often hear voices of ‘Harriet’, a bride who was shot dead by her ex-boyfriend in her wedding in 1805 and since then it has been a hotspot of paranormal activities.

There are total of seven rooms featuring a double bed each. There is also a private bath inside the inn, all tastefully decorated in period décor. In addition, as guests you’ll have access to the gentleman parlor, fireplace room and garden outside. Rentable for $169 per night, visiting the haunted inn of Boston is something you should look forward to.

It’s a matter of great debate whether ghosts exist or not. It’s even more wrangling to discuss, if any place can be really haunted or is it just being promoted or brought to limelight to generate revenue. Whatever might be the case, the late half of the year is about celebration. Whether it’s enjoying Halloween or celebrating Christmas, we should rather be traveling and exploring more and drawing conclusions based on personal experiences.