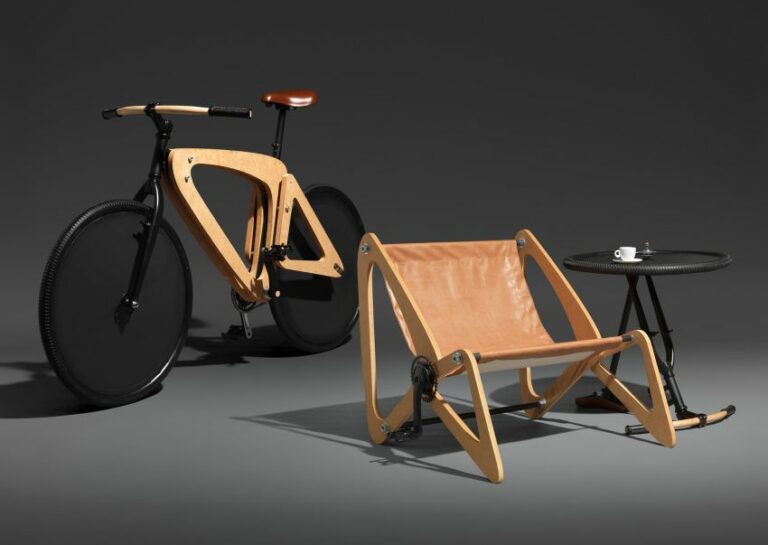 We have seen bikes dismantled down to a nice piece of furniture but rarely do we witness the flip side. Well, not anymore; Outlaw Bike is here to change that notion and scuttle on road without screeching like traditional furniture.

Bikes are the highest taxed products in Brazil. They are taxed 70 percent and furniture is just levied with twelve percent tax. Well, some quirky minds in the South-American nation have found a nifty way to evade taxes by designing furniture that can quickly assemble into a ridable bike. The originator of the Outlaw Bike is Denis Cardoso who apparently is also the founder of Cardoso Cycles from Brazil.

The main objective behind the project is obviously to raise an alarm against authorities cheekily, and without doubt to capture the attention of the consumers and the design-conscious. My subtle observation from the pictures of the bike tells me that the tabletop is used to make the wheels of the bike while the top tube, down tube, and seat tube are all made of wooden components of a chair. If you are still not impressed, how about the leather upholstery of the chair forming the saddle.

Well, there are other elements of the table and chair that are used appropriately, for instance, the table metal stand is used as the bike handle. The best part about the design is that it can be disassembled with ease and made into a chair and side table instantly.

Also Read: This Wacky Ping Pong Bicycle Table Will Leave You in Splits

It’s not just a well thought plan to circumvent the high bike taxes but also a masterpiece design that’s peach for the eyes. I’d rather term it, the Rebel Bike, instead of its original name for silently questioning the authorities while being inventive.

Denis Cardoso, the maker of the bike told Homecrux,

I designed the bike on the request of a client who wanted a two-wheeler that could turn in a furniture and vice versa. I designed and constructed the piece in my workshop and never knew it would become so popular.

Nevertheless, the bike design is simple, yet alluring. Balancing ergonomics with aesthetics, the Outlaw Bike is a very well thought innovation that could be the potential future of the football-loving nation.