With innovative disposal technology and DualTilt feature, the smart litter box prevents any smell from escaping into your lovely home 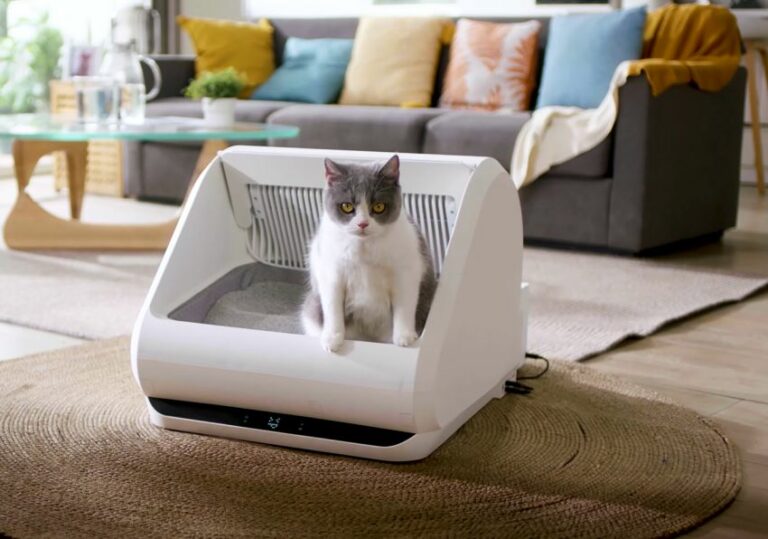 The market for self-cleaning cat litter boxes is getting bigger day by day and as a result, a new product is being built every other month. Today, we introduce a useful product for cat owners, who are looking for a modern cat litter disposal solution that can also reduce odor.

Japan-based Popur claims to change the clumsy, standard design of a self-cleaning cat litter box that usually stores litter in the base of the unit – leading to smell and other hygiene problems over time. The company has envisioned a two-box design that stores cat litter in a sealed trash bag inside a separate box for preventing the release of stinky odors in the unit or indoors.

The Popur X5 self-cleaning litter box is also distinguished by its disposal technology. It uses the DuoTilt mechanism that first tilts the tray to shift litter on one side, and then tilts it on the other side of the filter to dump waste into a separate container.

Each unit has a modular design – the filter, liner, fence, waste bin, and other possible accessories such as a cat monitor, weighing scale, power bank, etc. – that works for easy waste management and monitoring pet health, behavior, and more. These parts are easy to assemble and make the unit easy to clean and maintain.

This cat litter box can hold a maximum load of 15 kg of cat litter and has a waste bin with a net volume of 10 liters. It can store cat litter of one cat for up to 21 days. The Popur X5 has a 24-inch-long litter bed that would look appealing to felines and would suit modern interiors as well. There is an onboard display to see the current status of the unit. The cat litter box can be controlled with a mobile app easily.

The Popur X5 cat litter box comes in two models, with varying waste bins. The Basic model comes with a cardboard bin while the Pro has an automatic bin with a cover that prevents odors from releasing into a home. The Pro model is also equipped with an accelerometer for full box detection, an ozone generator for air purification, and a UV light for disinfection.

The Popur X5 self-cleaning litter box has a two-box design that blocks cat litter smell. Currently, it is seeking funds on Kickstarter and has raised nearly $400K at the time of writing, which is well past its 10K goal. You can book the Popur Basic for a pledge of $279 and $329 for the Popur Pro with delivery slated for October 2022.

The company has also announced a stretch goal on the realization of which they’ll provide a free fence to prevent cats from spilling waste outside the unit. The company says they have kept the design open which makes it easy to access for both adult cats and kittens.