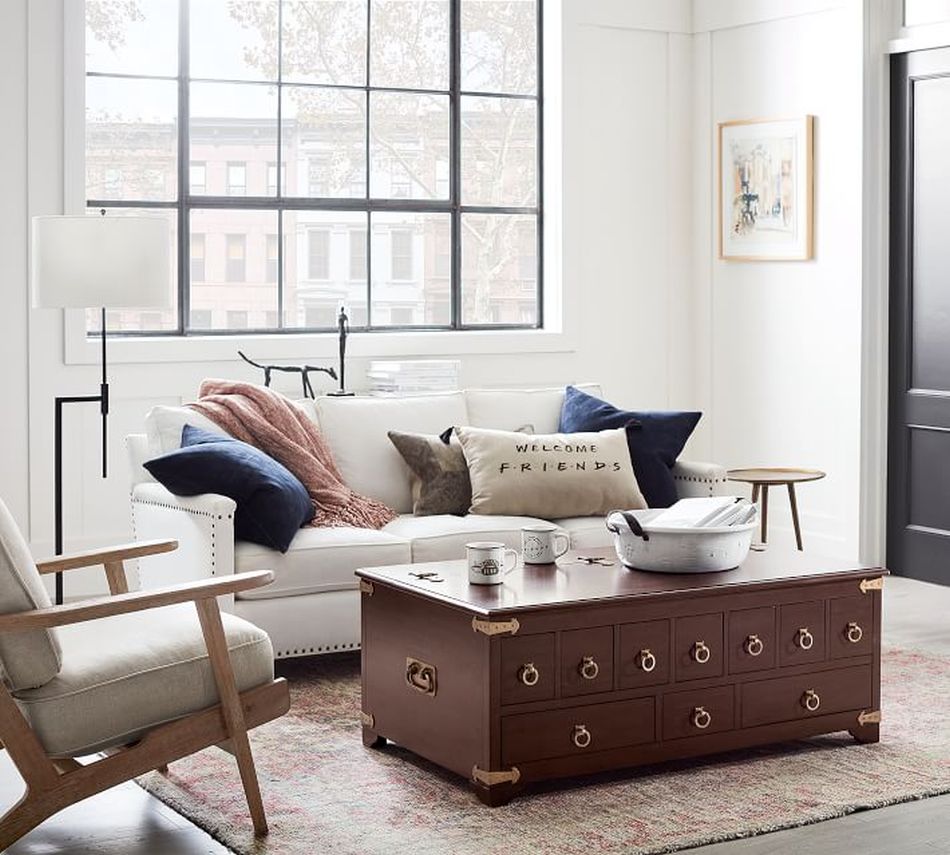 “Could we be any more excited?” While the Friends fans are waiting for a reunion, it’s hard to believe that it’s already been 25 years since Rachel, Monica, Phoebe, Joey, Ross, and Chandler made their way to our lives. Since the show was first premiered on September 22, 1994, it has been widely loved by people of all ages. Friends became a part of people’s lives and the characters, their apartments, the Central Perk all have been much discussed since.

When Pottery Barn first announced it would release a Friends Home Furnishing collection a few weeks ago, the fans all over the world were exhilarated. Celebrating the classic show’s 25th anniversary, Pottery Barn has finally released its much-awaited collection and we couldn’t be more thrilled.

Yes, Pottery Barn has brought back to life the Apothecary table (you know, from the days of yore) and it’s not alone. The collection features stylish pillows, mugs, wall art and furniture all inspired from the hilarious moments on this popular ‘90s sitcom. Just looking at the items would make a fan recall the scenes.

Do you remember “The One with the Apothecary Table”, where Rachel went a ‘little crazy’ (well, according to her) and created a Pottery Barn up in her apartment that she shared with Phoebe Buffay. Rachel lied to Phoebe that she got all that stuff from the flea market as our weird Buffay hated all the mass-produced goods.  Now, this Apothecary table might not be from the ‘White Planes’, but it’s the exact replica of the one from your favorite show.

Pottery Barn has brought you a collection of mugs with inscriptions of unforgettable, iconic lines from the sitcom printed on them. Who can forget ‘Joey doesn’t share food?’ One of the mugs has this inscription on one side while the other illustrates Joey’s favorite sandwiches.

The other mug would remind you of the scene where Phoebe says, “See? He’s her lobster” and Rachel and Ross getting together. This one has ‘You are my lobster’ phrase on one side and a lobster printed on the other side. The ‘I’ll be there for you’ mug has the lyrics of the theme song imprinted on it. There is a Central Perk mug and a travel mug too, which may remind you of the handsome blonde Gunther.

The collection also celebrates the purple walls of Monica’s apartment and the door with the golden peephole frame; a purple throw pillow pays tribute to our beloved apartment. The other pillow features the famous sofa from the Central Perk. One is with the logo of the show and has fringes on the sides to add a stylish throw. You can add these welcoming, friendly pillows to your living room, showing off your love for the best sitcom of all the times.

Pottery Barn is also offering you with a set of towels, which have “Joey doesn’t share food” on one and Rachel’s Thanksgiving Trifle imprinted on the other. Of course, you remember the infamous trifle with meat in it, which as Ross said, “Tastes like feet”.

The collection also contains Friends inspired wall art for your home décor. One of the canvases has the logo of the show with the theme song on it. The other features the sofa from their favorite coffee joint with the fountain behind it from the opening credits and the third has show’s logo on it. I sure am missing the colorful umbrellas here.

Last but not least, the collection also has a welcoming doormat; it would welcome all, be it Emily or even annoying Janice (but we all love her).

This entire collection of 14 products is up for sale, ranging from $15 to $1,100. You are absolutely free to stock up your apartment with this lovely collection but you might have to loosen the purse strings a little. Enjoy coffee in one of your favorite mugs from Pottery Barn while you binge-watch Friends again before it leaves Netflix.