From music to merchandise 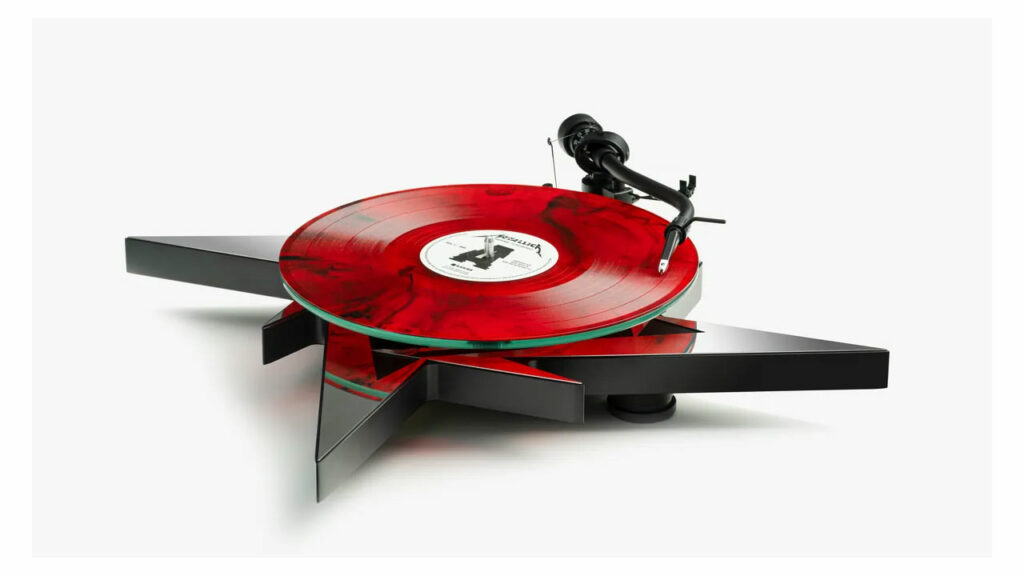 Playing bass guitar and making us headbang to their tunes, Metallica has been ruling over the music industry and our minds for more than 40 years now. In this period, they’ve delivered classics like ‘One’, ‘Master of Puppets’ and my personal favorite ‘The Memory Remains’, but for the first time, the American heavy metal band is introducing a limited-edition turntable that is expensive yet impressive.

Dubbed Ninja Star Turntable, the record player is meant for a dedicated vinyl collector seeking to enhance their audio equipment collection. Metallica team obviously didn’t have the expertise in making the turntable so they had joined forces with Austrian turntable manufacturer Pro-Ject Audio that resulted in a sleek and stylish turntable.

Boasting sharp edges through its MDF plinth, the Metallica turntable mirrors the band’s logo of lightning bolt form. The star-shaped turntable comprises a heavy glass platter and aluminum sub-platter with metal feet. The three-height adjustable damped aluminum feet make a perfect stand. On the other hand, the high mass of the glass platter produces the tightest and most accurate playback speeds and allows you to see the stunning turntable at the same time.

Designed and handmade in Europe, the turntable has an 8.6-inches S-shaped aluminum tonearm that comes with a detachable headshell to allow quick cartridge change. It comes pre-installed with a Pick it S2 C cartridge while tracking force, anti-skating and VTA are adjustable”, says Pro-Ject Audio.

Other key features include the turntable speed which is electronically controlled via a toggle switch that moves between 33 to 45RPM. In addition, there’s also a belt provided for playing 78RPM records.

The Pro-Ject + Metallica Turntable is scheduled to release later this summer and is priced at $1,599. We are not familiar with the total number of pieces that would be manufactured but estimate it to be very few.