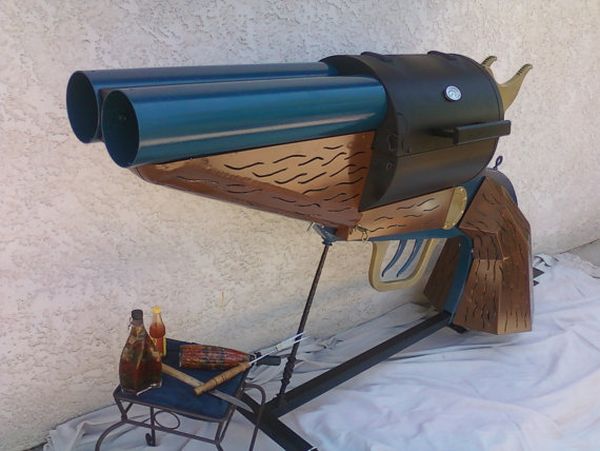 For long we have searched for a valid competition to the utterly boisterous Steampunk Locomotive BBQ grill. And, at last, we think there’s an equally robust one in the form of the above pictured Sawed-off Shotgun BBQ Grill. Booming and menacing in equal measures, this ruggedly potent design by California-based firesculpturear showcases its double barrel credentials along with a big-ass pistol grip.

The paraphernalia of the BBQ grills is inside the black-hued chamber (connected to the barrels), which can be opened via a handle at the top. The 5-gallon capacity fuel tank, on the other hand, is housed in the aforementioned pistol grip, thus allowing you for once to ‘play’ with fire, propane, and guns!

The snappy contrivance also has some practical features like its big wide sand wheels that make it easier to carry around for those weekend beach parties. However, the piece de resistance of the Sawed-off Shotgun BBQ Grill is surely its re-defining of the term ‘smoking guns’.

Smoke belches out of those ominous looking barrels, while the mouthwatering meat gets cooked and grilled on the inside. And, if you are worried by all this talk of smoke and fuel, the Sawed-off Shotgun BBQ Grill is constructed from sturdy materials like powder coated heavy steel with high-temperature optimization.

Finally, as for the pricing of this monstrous contraption, the figure in the tag reads around $9,550. But unfortunately for other BBQ aficionados around the world, the grill is only shipped from California to other parts of the United States.