By DattatreyaOctober 21, 2013No Comments2 Mins Read 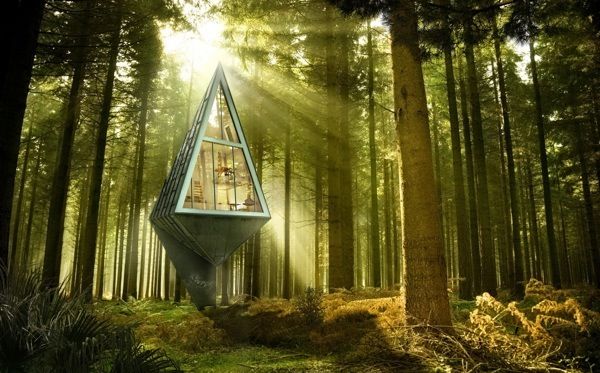 A few days ago we talked about the synchronization of industrial architecture within the scope of a forest. This time around, the ambit is more about the seamless integration of modernism within a forested area. Christened as the Primeval Symbiosis (Single Pole House), the ‘sylvan’ project is conceived by architecture student and interior designer Konrad Wójcik. The primary aim of the endeavor is to install credible living spaces in forests without disrupting the natural essence of the verdant landscape. On the other hand, the core functionality of the structural units entails households that can easily accommodate families of two to four people.

In terms of sheer inspiration, the designer took a ‘leaf’ out of the trees prevalent in the area. According to him, the form of the Single Pole House alludes to a modernist interpretation of the function and structure of trees. In real time, trees act as shelters for many animals by shielding them from predators. As a result of this influence, the housing units will be self sufficient in nature, while also replicating the shelter values of original trees, albeit for humans.

So, in essence, the end goal of the Single Pole House is to remind and influence people about the importance of trees, from the perspective of both ecology and environment. The project might even evolve into an entire community dedicated to the preservation of forested areas. And, beyond all such symbolic idealism, the settlements would also serves as ‘colonies’ of sustainable, zero impact human habitations.