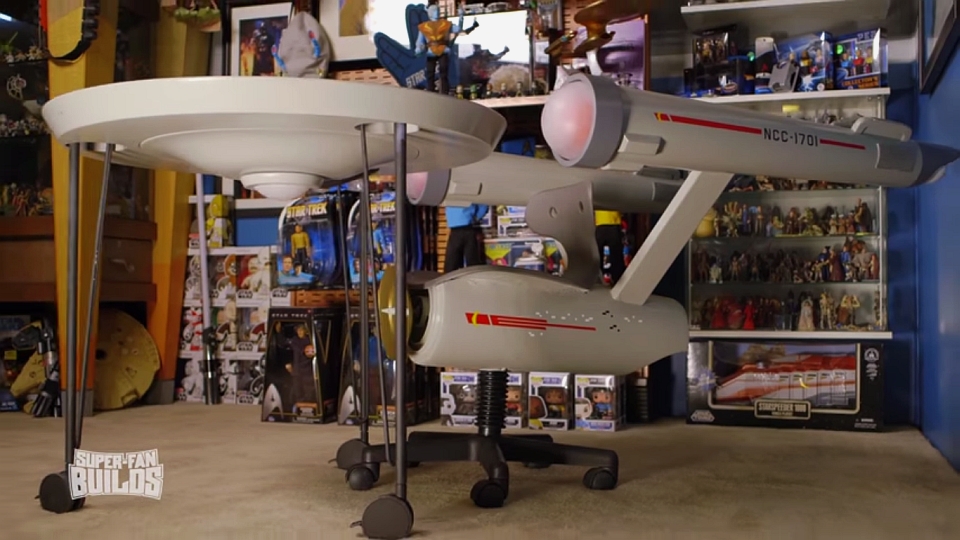 The Star Trek community and its relevant merchandise sales are still going strong. There are many crazy fans out there who even wish to own a private Starship Enterprise someday. Whether it happens or not, let’s take a look at one that is real for the time being. Super-Fan Builds, a YouTube channel, has made a made a scaled-down replica of the Starship Enterprise in form of a workstation for a super-fan Jake Geiger.

It comprises of two parts – the main disc of the Enterprise serves as table, whereas other parts act as armrest and seat. Jake’s office is filled with several collectibles inspired by the sci-fi movie and thus his girlfriend (who nominated him a geeky surprise) wanted a piece that he couldn’t resist from keeping into his office. Tim Baker and his crew devoted their time, creating an otherworldly workstation.

This Starship Enterprise home office is made from polyurethane foam and fiberglass resin. It is equipped with a USB hub and lights for cool looks. The roundish USS Enterprise table and chair, together invoke the image of the Starship Enterprise. It is so beautiful and detailed that it will attract any Star Trek fan.