Takes lavatory gaming to next level 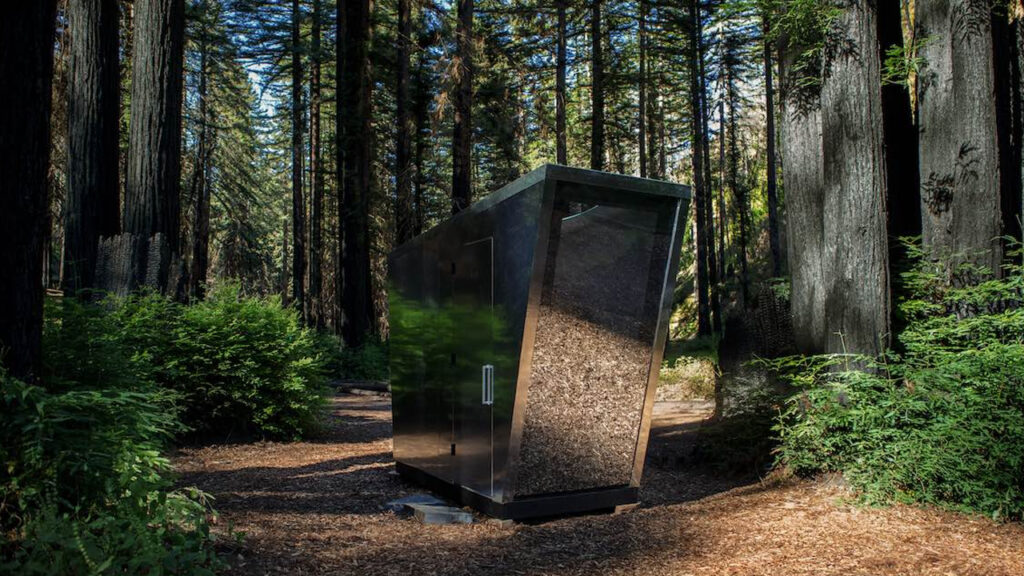 When I first saw this thing on internet, I thought it to be a work pod or some kind of modish trailer that can be towed behind Tesla Cybertruck. I was left flabbergasted, when I found out it isn’t a trailer but a hi-tech portable toilet which is no less than a ‘work of art’ as touted by the company. Designed by Jupe, this flat-packable toilet is dubbed The Portal and is well-suited for outdoors.

Generally, portal is a term synonymous with the word gateway. The whole idea behind the particular expression is entering into a different world or a new dimension. The connotation here is same, except you will be entering a portable potty pod and not a time machine, hence the moniker – The Portal stays true to its namesake.

The best part about the Portal is it isn’t one of those cramped and stinky portable toilets incorporated inside your campervan. It is rather an independent lavatory that serves as a perfect companion to the first cosmos-inspired flat-pack shelter unit introduced in December 2020.

Constituting a two-way reflective glass on the front and semi-reflective walls, it offers privacy without comprising on outside views of the nature. Boasting an all-white interior, the pod is three times spacious than that of a traditional portable toilet.

Glamorous in look and spacious in size, the portable toilet is off-grid capable and lets you enjoy the spectacular views of the nature. In case you still fell shy or uncomfortable, there is a retractable privacy shade that you can pull down while taking a dump.

While answering the nature’s call inside the cubicle, you can enjoy the sky-high views of the stars from the sky portal cutout in the ceiling which turns sky into a canvas. If you look at the pictures of the toilet ceiling on Jupe’s official website, you might get fooled that’s it is not a view, rather a picture placed on the ceiling.

Now, I’ve been using the term sci-fi pretty constant but there’s a catch behind it. What makes the restroom look sci-fi is its geometric form that boasts a metallic and glossy finish with sharp edges. The toilet is created to work off-the-grid, thanks to 200-watt solar panels and a 200-amp-hour battery powering the toilet’s LED lighting and an odor-ventilation system.

The Portal is designed by ex Tesla and Space X folks, implying your outdoor restroom is even Starlink compatible. I personally like this idea, since I am always scrolling my phone screen while taking the natures call.

Retailing for $8,995, the Starlink-compatible model is something you should look forward to buying. In case, you don’t want notifications bombarding your phone, check out the base model which begins at $4,995.

On a little downside, The Portals are currently sold out with the next production run in early 2023, so you might have to wait a little longer to place your order.