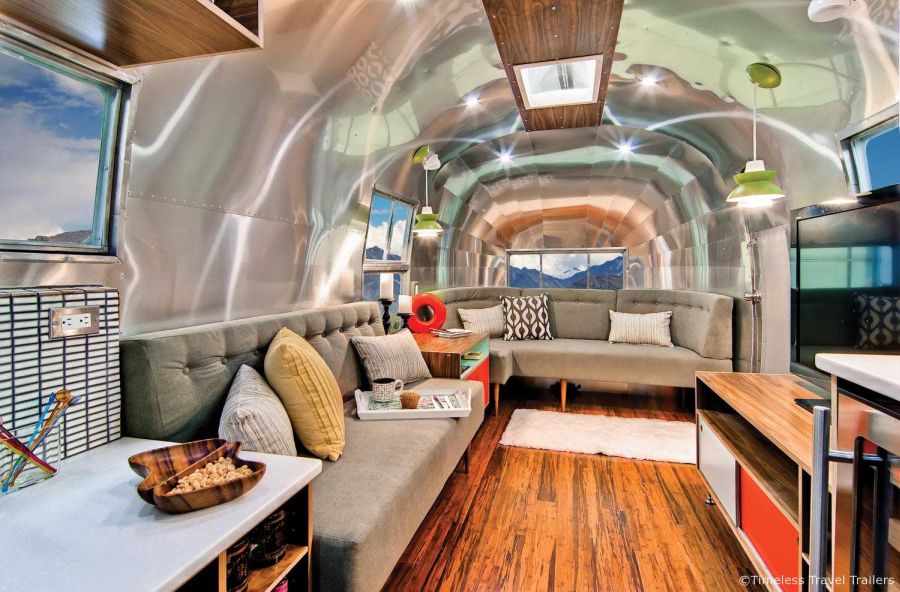 Airstream enthusiasts, feed your design inspiration with the awesome interiors of this 1962 Western Pacific Airstream, it proves just how versatile these campers can be. Airstreams usually size between 16-foot to 33-foot but this Airstream trailer is an exception since only 10 such 40-foot trailers were made in 1962 to serve as housing units for Western Pacific railroad crew.

In 2012, a Canada-based client commissioned the Colorado-based Timeless Travel Trailers to restore a rare 1962 Western Pacific Airstream. Designed with mid-century aesthetic and modern features, it now serves as a semi-permanent residence with an open feel. Its interiors skinned in aluminum go well with bamboo flooring and built-ins. Furthermore, the open floor plan makes the interior space feel larger.

Inside, the minimalist living room alongside the kitchen with walnut veneer cabinetry, white counters, and stylish ceramic backsplash leaves an envied impression. The bedroom is located at one end of the trailer for privacy and there are large horizontal windows throughout the Airstream, presenting unobstructed outside views. The bathroom isn’t left out; it has rustic wooden details and a tiled shower.

With a classic, mid-century interior that combines modern functionality – this impressively renovated Western Pacific Airstream trailer was sold for $200,000 in 2015.

Related Posts
Top 10 Interior Design Trends to Transform Homes in 2023
By Priya ChauhanJanuary 30, 2023
50 Best Tiny Houses on Wheels That are Downright Inspiring
By Happy JastaJanuary 28, 2023
Rustic Design Style Guide: Taking You Back to Your Roots
By Priya ChauhanJanuary 20, 2023
This Hunky Off-Road Camper Trailer Comes With a Kitchen and Queen-Size Mattress
By Atish SharmaJanuary 19, 2023
Leave A Reply Cancel Reply