DIY Batman Bookshelf – Create One for Yourself 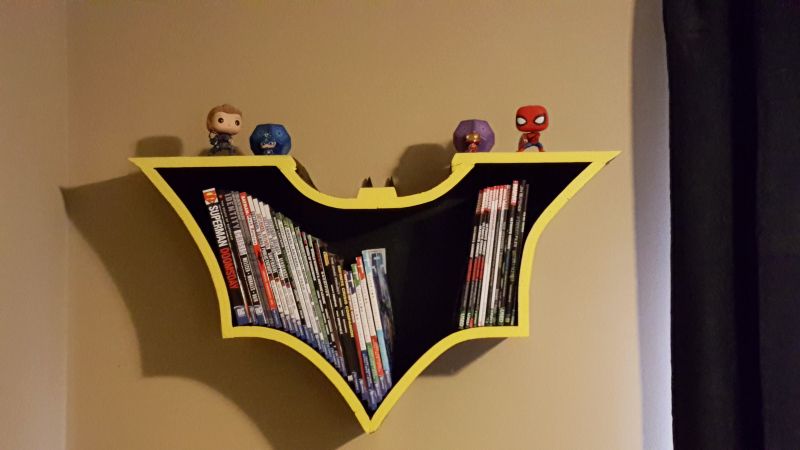 An Imgur user decided to create a Batman Bookshelf for his graphic novels as he always dreamed about it, but had no clue how to do it. Then one day he came across a video which was themed on using ‘Kerf cuts’ to curve boards. At first, he wasn’t so confident about his skills but eventually decided to try it out. The entire project was very tough, as he sometimes felt like quitting. But in the end, things worked pretty fine for him and he pulled it out quite well.

He began his project by drawing one half of the head shape on a small poster board, and once he had the drawing of one part he cut it out and traced it on both sides, to keep it as symmetrical as possible. The user then traced them on a 1/4″ plywood and sawed it accordingly.

Once the head was completed, he moved on to the wings and followed the same tracing procedure and replicated it out of the plywood. He had planned to have horizontal shelves for his book rack, but eventually had to change his mind, since it was not going well with the design.

To make the holding chamber he required few curves out on the wooden panels. This is when everything started going clumsily. Somehow, he managed all those cuts with the help of a Dremel saw and filled them with glue to stay in shape.

He wasn’t quite happy with the job done, but the next morning when he saw all the assembled pieces, which to his surprise weren’t looking that bad. He got excited and jumped on the second level.

At last, all the pieces were assembled and the much awaited Batman Shelve was finally up on the wall to adore the entire surroundings with decoratively housing all those mysterious novels within it.