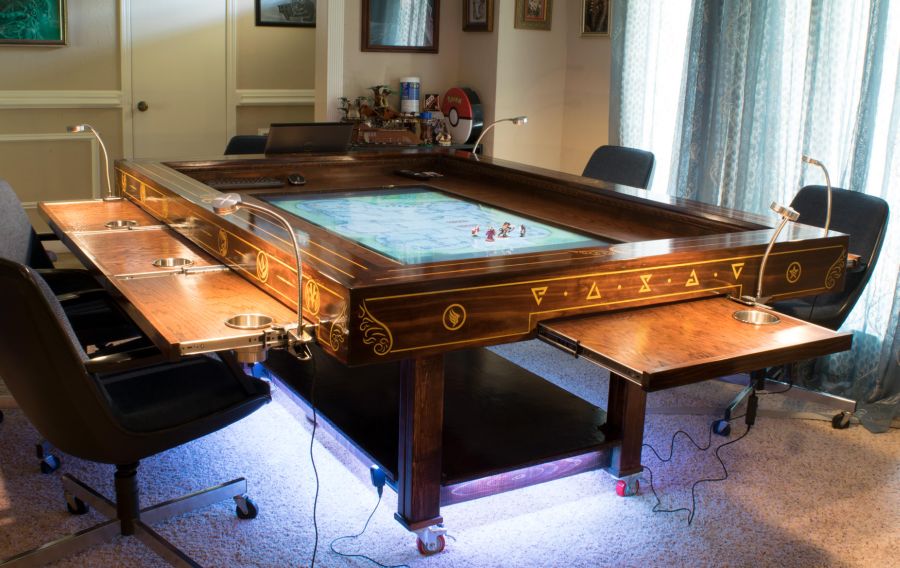 There have been some cool gaming tables we’ve seen in the past including one by Bum Kim and another by Super Fan Builds. This one, however, caught our eye for its design appeal, paired with the cool functionality. Designed by Imgur user [MrTroIIOKC], this gaming table has a multitude of uses. It can be used as a coffee table, dining table or a conference table.

It took him almost five months to complete the project and in the end, it turned out to be a cool table with a steampunk touch. The builder created cool art on each side of the table to match its gothic appeal.

The primary function of this gaming table is pretty obvious, but its use extends way beyond that, thanks to its clever design. The table is big enough at 4’ x 6’ and comes with an embedded 55” 4K display which is used for displaying maps, presentations or gaming visuals. The tabletop and TV screen are protected with a ¼” tempered glass which saves it from accidental spills and damages.

There is a decent stereo audio system which outputs audio to 4 speakers via Steamlink and Chromecast. Furthermore, it has external power outlets, HDMI, USB and Cat6 ports on DM side of the table. There are LED lights running underneath to impart Sci-Fi look.

There are leaf inserts to protect and store the gaming elements from kids and pets. These inserts also convert the table into a standard 5×7 play area. To expand usability a step further, eight writing drawers having stainless steel cupholders slide out from under the tabletop.

The DIYer says it cost him almost $2,000 to complete this cool gaming table, which is a bit on the higher end of the spectrum. Given the multiple functionalities, unlimited hours of gaming and sheer presence the table puts forth, it’s a worthwhile investment.