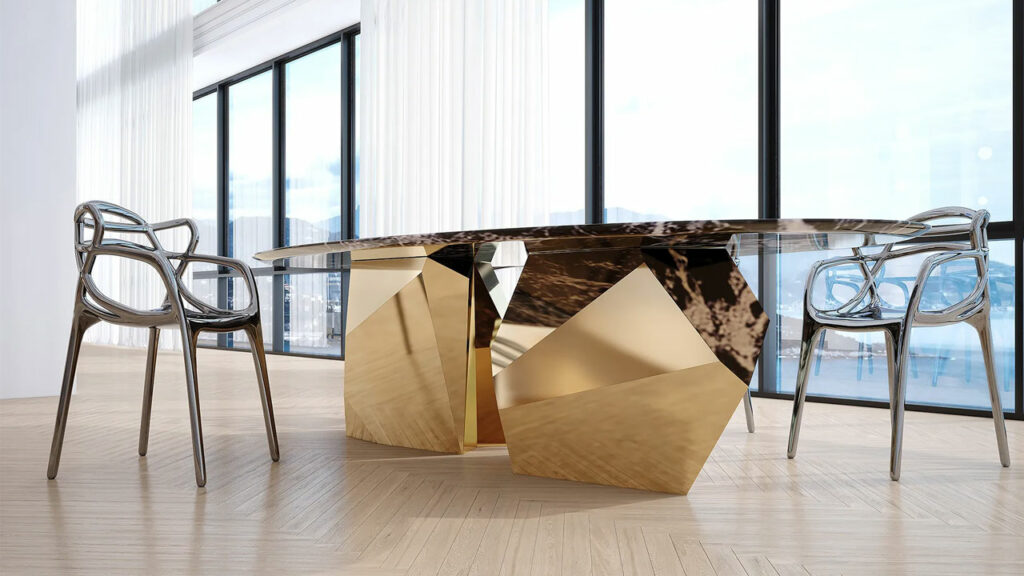 What makes Duffy London so special? Some will say it’s the tinge of phantasm and visual trickery in their design, others will debate that the material usage in their furniture makes them the hot pick for your living room. But, I firmly believe it is the consistency that makes the London-based studio one of the best in the business. When it comes to furniture designing, Duffy London makes sure they keep the design lovers glued to their projects by introducing one design every three-to-four months.

Recently, Christopher Duffy and his team has unveiled a limited edition table that is part of the studio’s SOLO collection which also includes, the Impossible table and the Serenity console table. Kronos is the latest addition to the tally and is limited to just 20 pieces; though bespoke pieces are available on request. As teased in the title, the table fuses marble and metal together to give birth to a spiffy and stylish furniture that is available in coffee and dining versions.

The table exhibits an irregular form and rock-like structure that forms the base of the furniture. Finished in matte black and mirror-polished gold, the alien rock shape splits from the center, partitioning the base into two pieces. Both the pieces echo each other’s form, emphasizing where they were once together.

The base supports the sumptuous curved tabletop, which is either made of solid marble or glass. It is to be noted that the Kronos table is created using a timer-led algorithm to ensure no two tables will ever be the same. Duffy London explains that the multi-faceted shapes that form the base are derived from the same technique as aforementioned.

With Kronos we wanted to use technology to help us make something beautiful that appears as if it’s totally random, almost organic in nature, like a great, shimmering rock that’s been split apart.  The design brief – in this case, using a self-generating algorithm – provides the creative impetus and actually becomes the foundation of the creative process and the engineering behind the structure

Every model of Kronos is individually designed and handmade by in-house craftspeople. The coffee table version is available for $33,430 while the dining table version can be availed for $57,895 from the Duffy London official website.

If you’d like to know more about Duffy London’s design approach, don’t hesitate to check the Christopher Duffy interview.