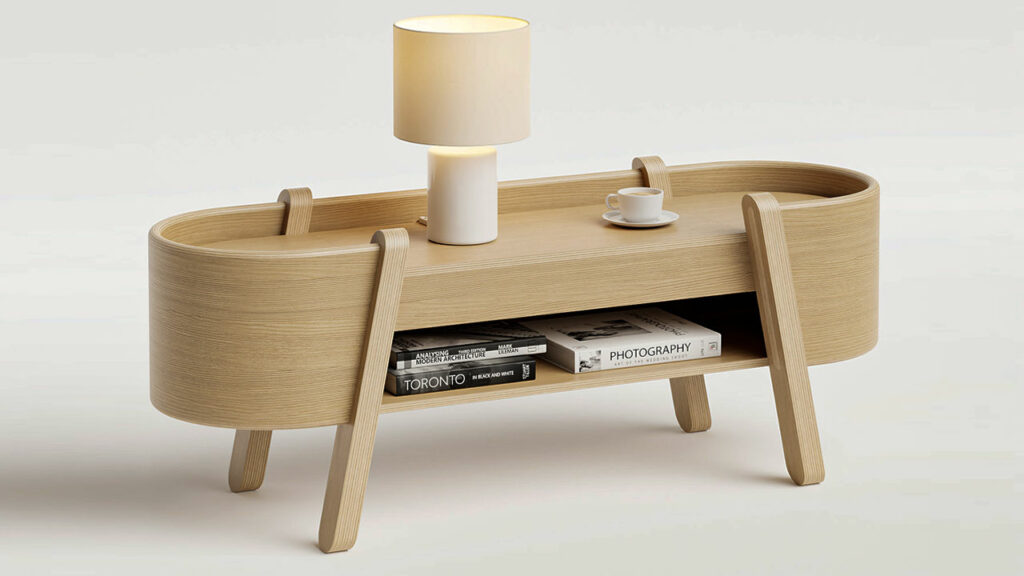 ‘Design is an attitude’, said Joao Teixeira in an exclusive interview with Homecrux a month back. Well, his latest creation speaks volumes about the statement he made. The Portuguese furniture studio is known for creating aesthetically pleasing furniture designs that blend with the interior and also offer smooth functionality. However, the latest furniture design by the iF Design Award-winning designer is not just about aesthetics and clever niftiness but it also ups the ante in attitude, elegance, and grace.

Dubbed Embrace, the sideboard boasts unique joints, soft curves, and overlapping layers. It is named after the curved plywood band which hugs the overall unit leaving an opening on the front. This opening serves as a storage deck (shelf) that can house magazines and other accessories. Poised on four legs, its top can be used as a coffee table.

The sideboard is designed so cleverly that one does not get a glimpse of the drawers that lie underneath the flat top. What’s visible in the picture is the main storage deck that we mentioned above, although what’s hidden are three drawers.

Two of the three drawers on either end of the unit feature a vertical opening, and thus functioning as chest storage. A conventional drawer in the middle can be pulled like any other traditional drawer. All these drawers can be used for storing various items.

Joao Teixeira mentions, the Embrace sideboard is designed in such a manner that the upper cabinet creates an offset in comparison to the curved panel which makes it possible to pass the cables through the gap easily. As far as the usage of the furniture is concerned, it can be a great furniture piece at entrance and even as a work from home table.