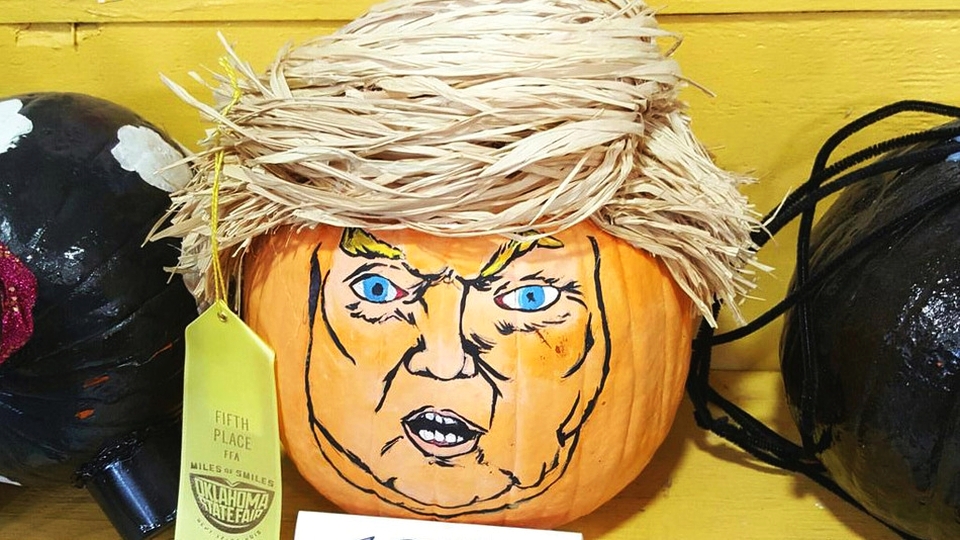 Get in the Halloween Spirit with Donald Trumpkins

Halloween is still a month away, but pumpkin carvers have already started coming up with crazy ideas to celebrate the spookiest day of the year. Forget the idea of carving scary faces on pumpkins. That’s so 2014. The new hype is all about carving Donald Trump’s face on jack-o’-lantern.

The fun part is Trump’s name perfectly mashes with pumpkin, and that’s the reason these trending Halloween squashes are called ‘Donald Trumpkin.’ There’s even a campaign website around the Trumpkin, which is completely dedicated to Trump and pumpkins to ‘Make America great again.’

More information about the project has not been revealed, just a short bio stating, “I am big, round, orange and full of hot air. Just like my dad.” That’s assumed to be about Mr. Trump. So, the latest pumpkin trend started by pumpkin carvers is likely to take the Halloween decor to the whole new level.

Want to create a similar Trumpkin to decorate your home for the eerie celebration? Well, you can create it yourself at home using a huge orange pumpkin, paint, and your ability to render bushy blonde eyebrows from hay. But don’t forget to share your jack-o’-lantern designs on Instagram and Twitter with hashtags ‘#Trumpkin’ and ‘#Trump16’. With the all-new internet trend, we’re sure this is going to be the fall of the Donald Trumpkin.

Not only that, but you can even carve pumpkins faces inspired by other famous personalities like Hillary or Bernie Sanders. Or take inspiration for your own Trumpkin from some artistic ideas shared below.

This was a highlight in the FFA barns. Donald Trumpkin placed 5th. Had so much fun at @okstatefair pic.twitter.com/fmla0OEJso

HERE HE IS DONALD TRUMPKIN IN ALL HIS GLORY pic.twitter.com/zUgXGASBGt

AN 8 YEAR OLD AT MY TOWN FAIR MADE A DONALD TRUMPKIN I CANT HANDLE THIS pic.twitter.com/TjLvliZqxu — ☆彡-rachel- ☆彡 (@doompy_poomp) September 12, 2015