This Round Coffee Table Doubles Up as a Cat Bed

A smooth blend of form and function, this coffee table can be a cozy nook for your cat to hide in 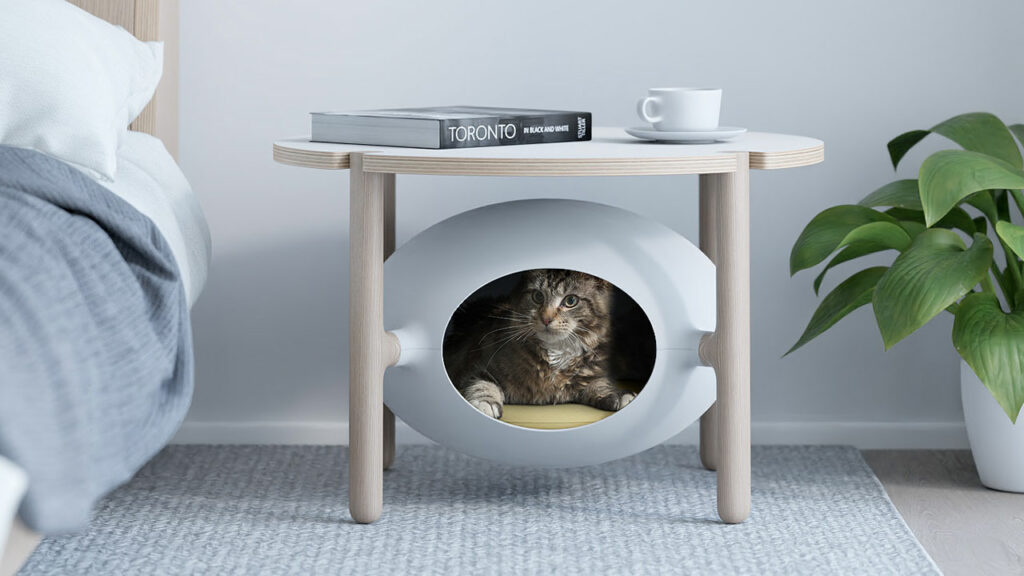 Joao Teixeira is a man of his words. I don’t have any favoritism for the Portuguese designer but his concepts are so mind boggling that you can’t skip them. As far as the expression ‘man of his word’ is concerned, it dates back to the interview we had with the celebrated furniture designer. In that conversation with Homecrux, Teixeira said, “I might be looking for a multifunctional piece of furniture that I haven’t yet seen in the market but is just an idea for now.”

The designer also hinted on working around another pet furniture. Well, he stayed true to his words and two months later after that interview, Teixeira has introduced Igloo coffee table that doubles as a cozy cat bed. You have seen many designer cat beds in market but nothing’s like Igloo. It not only serves as a furniture piece but also provides a cozy nook for your cat to hide in.

In a nutshell, it is a round coffee table integrated with a shelter for your pet. Poised on four wooden legs, the table has a spherical dome like structure under the top which serves as a pet bed. It looks super comfortable and private. There are side connecters that root out of the dome structure and overlap with the legs for strength.

Also Read: Tender Table is an Interplay of Curved Surfaces

Joao Teixeira explained, “I wanted to create an interesting contrast with materials and shapes, so that the product could be used by cats but also could feel like a sleek piece of furniture. So, for example, by adding cut outs on the table top the product easily became sophisticated. The white wooden top helps to create a relation with the white plastic box underneath it.”

Overall, Igloo coffee table is a cool furniture project that aims to create a smooth balance between form and function. This multifunctional furniture concept is highly functional for felines as well as humans and will also add great aesthetic value to home.