As rangy as it gets 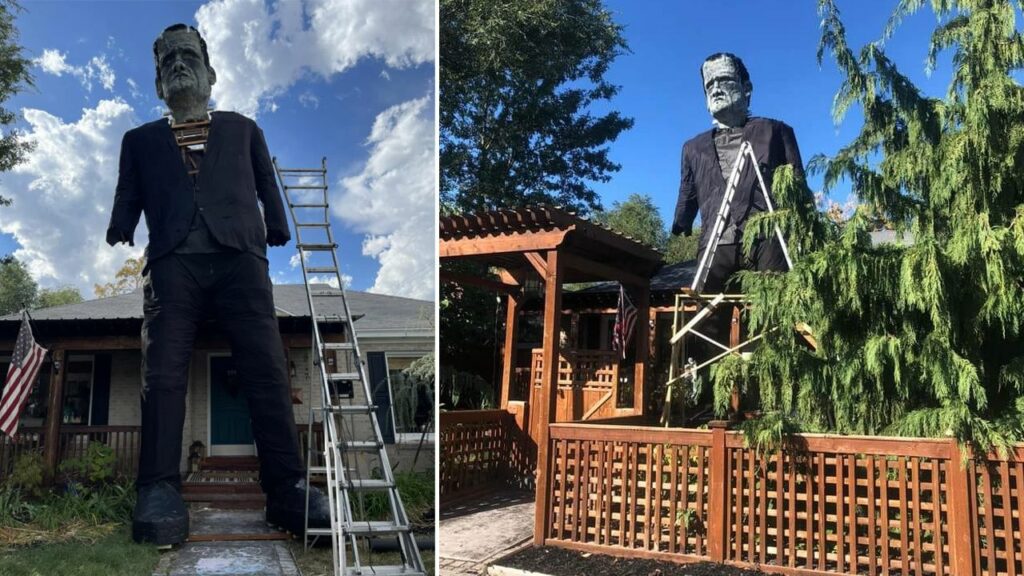 The official countdown for Halloween 2022 has begun. We are less than 30 days from celebrating All Hallows’ Eve and people have already started decorating their homes, front porch, and yards with spooky stuff. Ammon Smith is one DIYer we love featuring on our ‘road to Halloween.’ Courtesy of his unique creations and larger-than-life Halloween displays, the Salt Lake City resident has gained an immense reputation over the years.

While many of us can’t even build a scarecrow on the ground, he is working on an effigy that is humongous in size. One can make out from the display that the Halloween display is the famous mad scientist, Frankenstein. The artist previously built an Area 51-themed Halloween display at his home in 2019.  This year, he is taking things beyond imagination and building a giant Frankenstein in his yard.

Estimated to be around 30ft tall, building the Frankenstein has not been easy. The biggest challenge that Smith had to encounter while constructing this Halloween display was putting the head on its torso. I am myself estimating the Torso to be around 25ft, but that’s just a wild guess. I can imagine how difficult Smith would have found it to place the skull there.

“Putting the head on was terrifying even after many beers. Maybe eight, we weren’t counting. Probably ten,” Smith writes on Facebook.

From the images, we can make out that the effigy is made of scrap wood, chicken wire netting mesh, and old painting drop cloths just like his previous creations. The artist has also donned Frankenstein’s display in clothes which I assume he has made using polyethylene trash bags. Nonetheless, Frankenstein’s effigy looks so real and intimidating.

The massive Frankenstein is still under construction but the artist’s social media is already flooded with comments. A Facebook user commented, “AWESOMENESS, my family drives from Idaho Falls every year. Just to see your mad skills and talent,” to which Smith replied, “Man, that is a humbling and fantastic compliment. Thanks for making the drive just to see my piddly Halloween trash!!” Well, his creations are certainly not trash, rather, they are mesmerizing and worth admiring.

Netizens are confused about how Smith managed to successfully put the head over the torso. To answer these queries, Smith writes on his Facebook page, “Top rung of the 12-foot ladder on a 12-foot roof plus my height, and holding his awkward head.  I trust nobody here will call OSHA on me.”

There is so much love pouring in for the artist, he has already won the internet this Halloween. A user notes, “I live in Arkansas, but I’ll be in Utah in a few weeks for a football game. I’ll definitely drive by this house.” Humble Smith replies, “Come see me.”