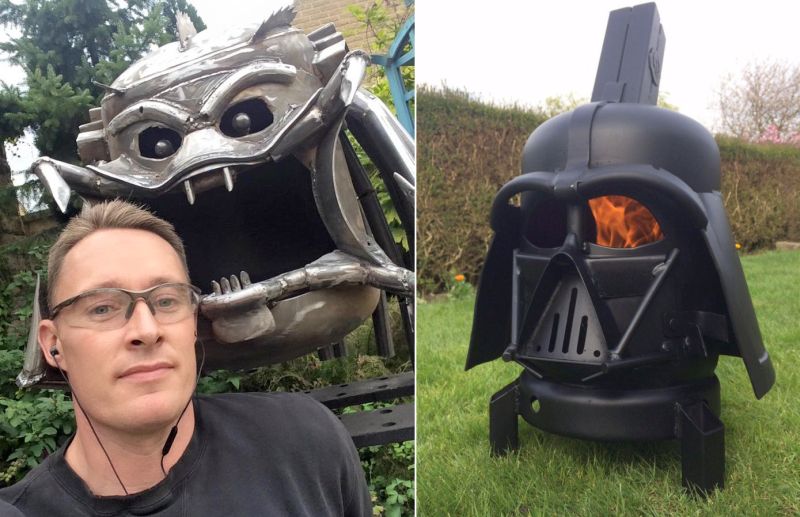 With a keen eye for design combined with the wit to imagine fictional characters as functional everyday objects, Alex Dodson has made a name for himself by creating some of the most intriguing firepit and wood burners that you’ll ever see. Currently operating under the brand name Burned by Design, Alex has mastered the art of creating themed burners and firepits in his establishment in Barnsley, UK.

The countless designs inspired by characters like Darth Vader, BB8, Xenomorph and many more speak volumes about Burned by Design’s expertise in coming up with state-of-the-art custom build firepits and wood burners for your home.

So, let’s have a one-on-one interaction with the man himself to get more insight into Alex’s vision about his niche creations. 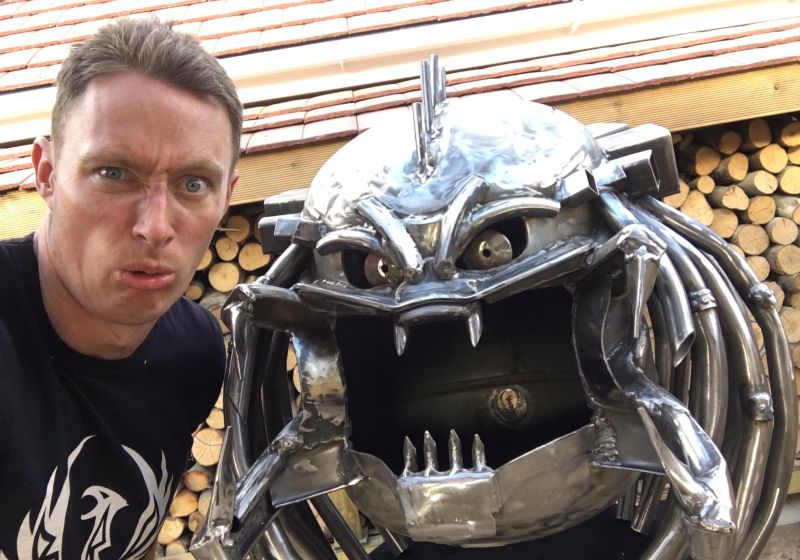 Alex Dodson: I have been full time with Burned by Design for a little over a year now and previously I was a full-time technology teacher tasked with inspiring the next generation of designers.

Since the dawn of Lego, I have always been keen to design and make stuff. The idea for the wood burners came from researching upcycling for an A level Product Design project, I saw a picture on the internet of a guy who had upcycled an empty gas bottle into a standard wood burner and decided to give it a go.

At this point, I’d done very little metal work and taught myself to weld using a stick welder I bought from Lidl for £30 and a few Youtube videos. Stick welding is quite difficult and it took me ages to get going…

It’s like trying to light a giant match with a lightning bolt while being blindfolded… Despite the difficulty, I persisted and managed to set fire to my parents’ garage a few times as well as myself…

My dad had a few empty gas bottles knocking about in his builders’ yard and it took me about a week to make my first stove. The stove worked well and I even cooked my tea on it. I sat and watched the flames in the belly of the burner when the idea of making a burner in the shape of Darth Vader’s head popped into my head.

I was hooked and off I went to work on my next stove. I posted on a website called www.instructables.com and it was a huge success…

It got liked and shared all over Facebook, and I’m now shipping them all over the world. I made a bigger version of the Vader burner called Big Bad Vader Burner on Instructables and entered it into a metalworking competition which was sponsored by Lincoln electrical and I ended up winning the grand prize, an all singing and all dancing dual MIG welder and all the safety gear.

It’s that which I am using now to make all my stuff. Of course, I had to teach myself to MIG weld but that’s not so hard compared to Arc welding.

It’s much quicker and less noisy than grinding and allows for much more creativity.

HomeCrux: Is Burned by Design a one-man army or a team of creative people?

Alex Dodson: Burned by Design started as a one-man army, but trying to teach full time, fabricate, email and keep on top of social media was taking its toll. I now sub out some of our more popular designs, but I still take on the lion’s share of new designs that come our way.

We are really appreciative of the imagination and enthusiasm that comes from our clients and customers design ideas, and that is where most of our new designs come from. We will generally request a picture of something that a client wants turning in to a wood burner. The tricky part is working out how to take a 2D image and make it into a functioning 3-dimensional wood burner.

We have to consider how the fuel/wood is going to be loaded, where the smoke is going to go, will it have a stand etc. But I think all of this has to come second to how the burner looks and what form it takes.

My younger sister, Lynsey now works for me part-time dealing with all the tricky stuff, like company accounts, tax, vat and all the other boring stuff. She’s a massive help though and it frees me up to spend most of my time getting creative in the workshop. 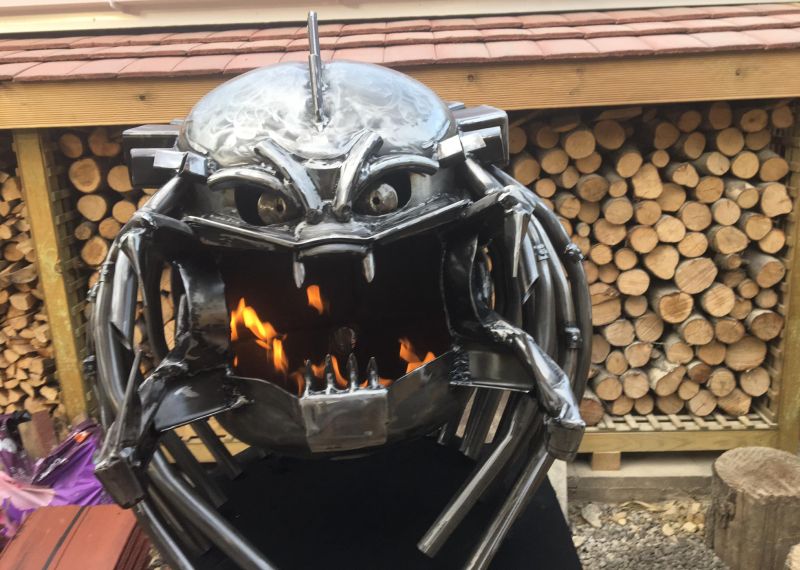 HomeCrux: Your obsession with superheroes is pretty obvious, which is your favorite fictional character?

Alex Dodson: I would say my favorite fictional character has to be the predator, I absolutely love the original movie and know most of the script word for word… he also doubles as one of my favorite wood burner designs, he has some piercing eyes and a big open mouth, so you can see lots of the fire…

He also has 6 exhaust vents to the rear which you can get the flame firing out of… cool. I recently made a supersized one for a chap over in the states…

HomeCrux: As an artist and designer, what do you think is the role and importance of firepit design in making a perfect home?

Alex Dodson: I think there is something quite magical about the fire which draws people together, something that is buried deep inside the human psyche. The flames are almost hypnotic, I think sitting in front of the fire encourages friends and family to chat face to face, forget the TV, your mobile phone and unsocial media.

It gives the chance to talk and get to know your friends and families interests, it offers warmth and comfort and brings people together.

HomeCrux: What is the feeling you want people to have when they look at your designs?

Alex Dodson: I guess the feeling I want my customers/clients to feel when they see my designs is excitement, a must-have feeling… I want to stimulate people’s imagination…

It is easy to choose an existing project or product, but it’s something quite special to have something designed which is personalized to their wants, desires, and tastes.

HomeCrux: What all roadblocks did you face while designing them?

Alex Dodson: It got liked and shared all over Facebook and I’m now shipping them all over the world. I made a bigger version of the Vader burner called big bad Vader burner on Instructables and entered it into a metalworking competition which was sponsored by Lincoln electrical and I ended up winning the grand prize, an all singing and all dancing dual MIG welder and all the safety gear.

It’s that which I am using now to make all my stuff. Of course, I had to teach myself to MIG weld, but that’s not so hard compared to Arc welding.

HomeCrux: Any inspirations that you would like to mention?

Alex Dodson: The internet is an amazing place to draw inspiration with thousands and thousands of images literally at your fingertips… This is where most of my inspiration comes from, I’m also starting to get to grips and follow other designers on Instagram.

I’m also a member of quite a few groups on Facebook of like-minded people, it’s a great way to get my work out there. I recently posted on my page and with no paid advertising it had had close to a million views in less than a week. 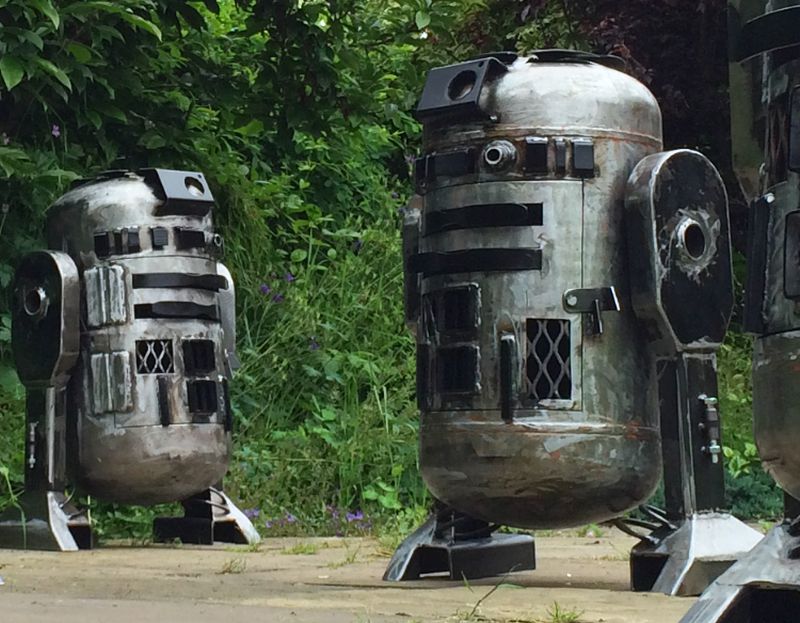 HomeCrux: What’s getting crafted these days in your workshop that your fans like us will see in the coming days?

Alex Dodson: I recently crafted a Motorhead war pig burner which has triggered a whole new avenue of heavy metal and rock band designs. Keep your eye out for Eddie from iron maiden and Vic Rattlehead from Megadeth…

I’m also working on a DR Who tardis and a Start Trek design but literally, the possibilities are endless, the only limit is one’s imagination.

Alex Dodson: When I’m not crafting wood burners I love to mountain bike and get to the Alps on my snowboard, I spent 4 winters teaching snowboarding in Banff, Canada, so the mountains have a special place in my heart.

Alex Dodson: I have two wood burner at home or more an outdoor fireplace and a wood burner… I am particularly proud of the pagoda and fireplace which has taken me a few months to build, but I did all things apart from the stone arch myself. We spend quite a few nights out there so far and hopefully more to come. 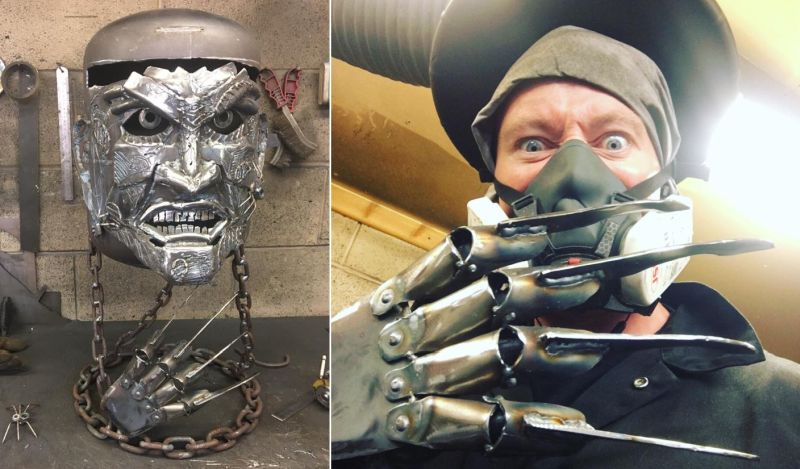