Like every previous year, very luring technologies, gadgets, and devices were unveiled at the CES 2019. This year, the biggest tech fest in the world was dominated by smart home technologies and products, and this is what made the event different from yesteryears.

The intriguing event saw a number of smart home appliances, furniture, security devices and other home essentials displayed with release dates of later this year.

If you have missed something that you shouldn’t have, at the Consumer Electronics Show, we have below a compendium of best smart home devices that were on show at CES 2019. Read on.

What are the Best Smart Home Products from CES 2019?

1. Laika Pet Monitor Feeds and Plays with Your Dog When You’re Away

The pet surveillance market is dominated majorly by pet monitor cameras or interactive monitors which let you talk with your furry friend. Some of them even feed your pet at set intervals of time. Now, a new kind of pet monitor has been spotted at CES 2019 which adds an element fun too.

French company CamToy has come up with a pet monitor dubbed Laika which behaves like a companion for your pooch. It rolls around, follows your dog and even gives treats from time to time. This way your pet is entertained fully even when you are not at home.

Laika pet monitor can be set on automatic self-running mode or the user can control the movement remotely from anywhere with the companion app. There are onboard cameras which let you keep an eye on your pet and you can toss treat(s) using the app’s interface. END_OF_DOCUMENT_TOKEN_TO_BE_REPLACED

2. Pepe Pet Dryer is a Relaxing Sauna for Your Furry Companion 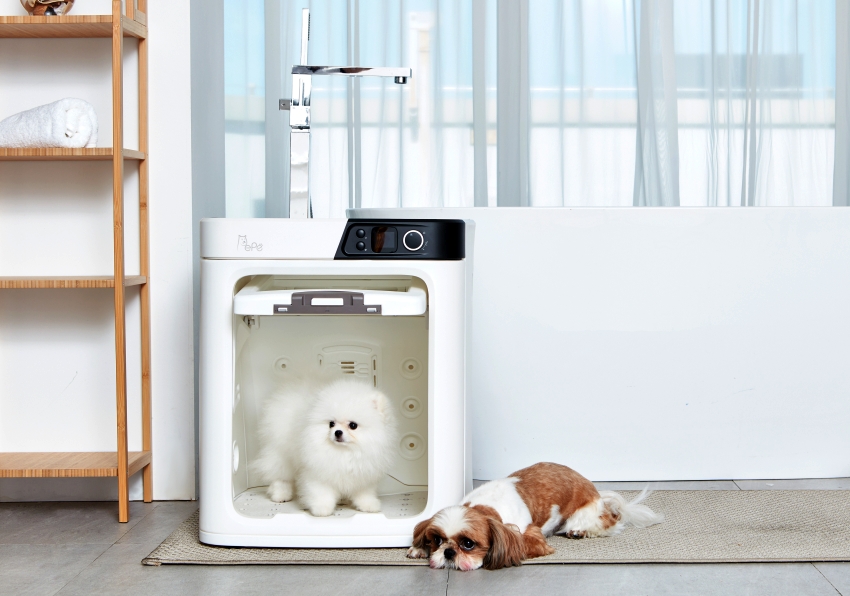 Pampering your spoilt furry friend is a usual chore. So why not take that extra step in pet care? At CES 2019, Singapore-based company Pet Connexion displayed their pet dryer which any cat or dog would fancy. Called Pepe, the dryer is tailor-made for pets of all medium-sized breeds.

The pet dryer works well for both cats and dogs as it dries every strand of their fur. This saves you from all the hassle of drying. Moreover, it also prevents water spillage after bathing your pet.

The technology used in Pepe is nothing fancy as it is simply a dryer designed in a way to accommodate your pet. Just put your pet inside the washing machine-sized dryer and set the temperature. END_OF_DOCUMENT_TOKEN_TO_BE_REPLACED 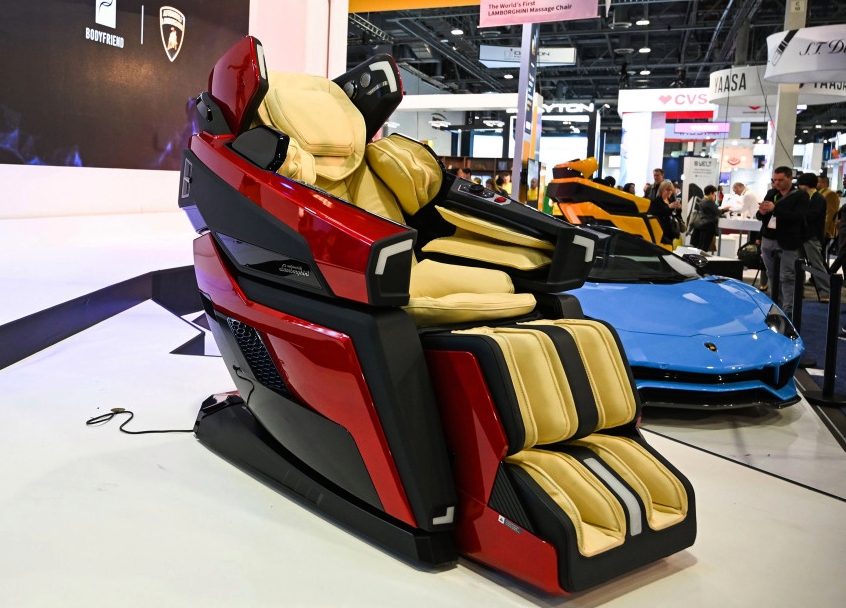 Inspired by the Lamborghini Aventador supercar, this massage chair designed by Boyfriend (South Korean health group) in collaboration with Lamborghini won the innovation award at the Consumer Electronics Show 2019. The LBF-750 massage chair looks like a transformer but unfortunately, it doesn’t transform into a supercar with the push of a button!

The luxury massage chair announced last year is loaded with ECG sensors which display the heart rate in real time on the remote control. It offers 23 massage modes along with the added luxury of audio (courtesy 5.1-channel speaker system) and light therapy functions. You can also adjust the ergonomic positioning of the chair depending on your preferences. END_OF_DOCUMENT_TOKEN_TO_BE_REPLACED

4. Ring Door View Cam is a Video Doorbell for Every Home 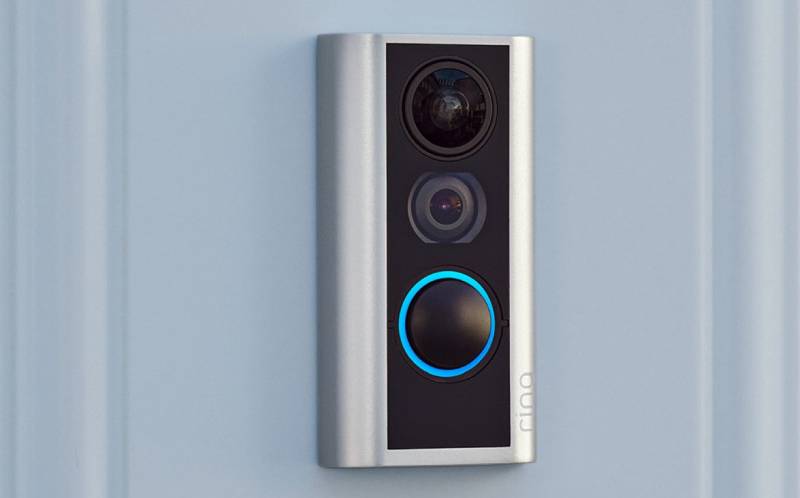 Amazon-backed smart home company Ring has launched the Door View Cam at CES 2019. Ring claims it’s a ‘doorbell for every home’, and so it is. Frankly because it fits right into the existing peephole slot of your door and doesn’t require any additional cabling and installation.

Ring Door View Cam is just like any other video doorbell intrinsically, but what makes is stand apart is the ease with which it can be installed. Just remove the existing door peephole, install the View Cam on either side of the door in place of the door viewer, put in the rechargeable batteries – Voilà, the Ring View Cam is all set to roll.

It’s evident by now that the View Cam can be used in any door with a peephole. This makes it a perfect security device for the entrance of rented accommodations since tenants can install the View Cam without any extra installation that landlord may hesitate to allow. END_OF_DOCUMENT_TOKEN_TO_BE_REPLACED 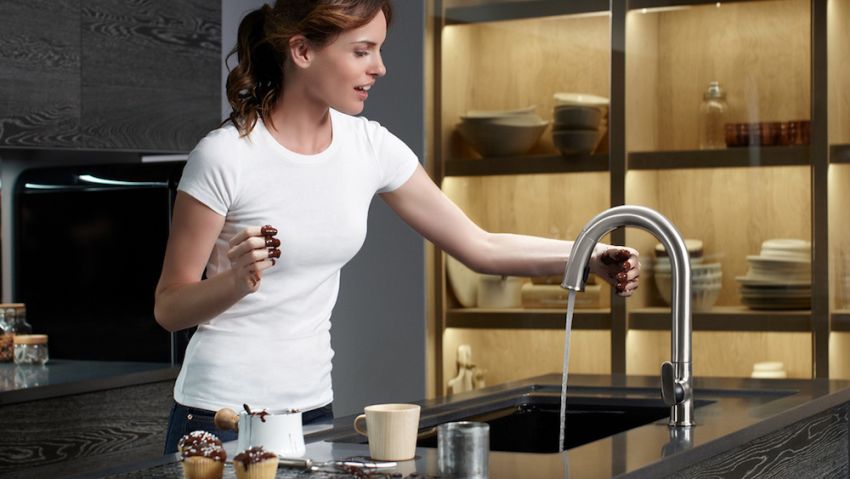 This year Kohler has announced the latest version of Sensate hands-free faucet at Consumer Electronics Show in Las Vegas. If the Kohler Sensate sounds familiar, it’s because this line of faucets was first introduced in 2013 to bring hands-free control with proximity sensors. But now the new version comes integrated with Alexa, Google Assistant, and HomeKit support, taking touchless control to a whole new level.

The Sensate Touchless kitchen faucet with Kohler Konnect enables users to dispense measured amounts of water and turn the water on or off through simple voice commands or motion-based interactions.

The users can full nearly an eight-ounce cup of water or a large pot with hands-free voice control. The sensor-enabled faucet can monitor water usage that’s displayed on the Kohler Konnect app for more convenience. END_OF_DOCUMENT_TOKEN_TO_BE_REPLACED

LG rollable OLED TV rippled quite a buzz at last year’s CES with its eye-catchy design and practical functionality. Then it was a prototype and now at CES 2019 LG just previewed the rollable TV at their press conference. LG Signature OLED TV R (it’s finally got an official name) rolls back into a compartment which also houses the 4.2-channel, 100W front-firing Dolby Atmos audio system.

According to LG, the rollable OLED TV can survive 50,000 cycles of rolling up and back into the base. The 65-inch TV has 4K resolution, HDR mode and smart connectivity for modern day users. END_OF_DOCUMENT_TOKEN_TO_BE_REPLACED 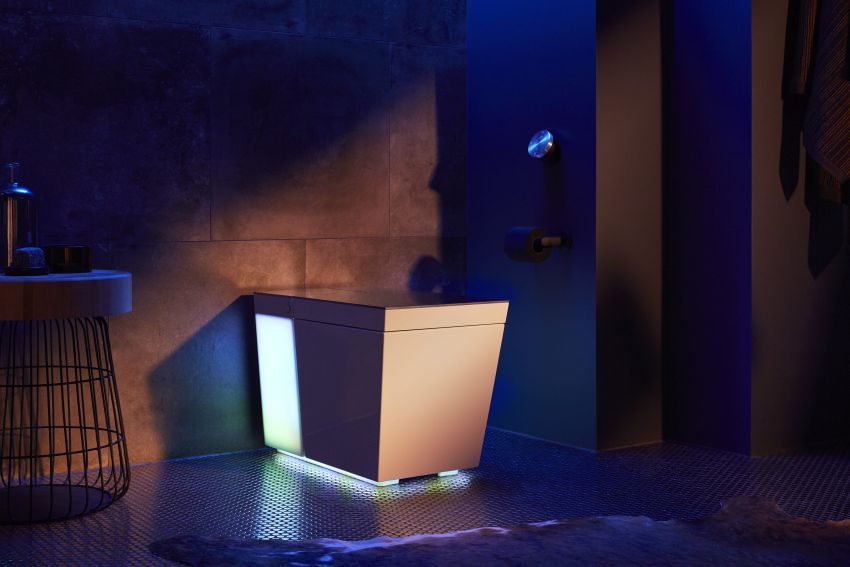 Some of these bathroom products, including the Numi 2.0 Intelligent Toilet are enhanced with the KOHLER Konnect technology. Other features are heated seat, foot warmer, lighting, Bluetooth speakers and built-in Amazon Alexa for voice control.

The static lights of the earlier version are upgraded to dynamic and multi-colored ambient and surround. According to the company, these lighting, audio and control enhancements allow users create a fully-immersive spa-like experience in bathroom.

The Numi 2.0 Intelligent Toilet sets up a new standard of convenience in bathroom. 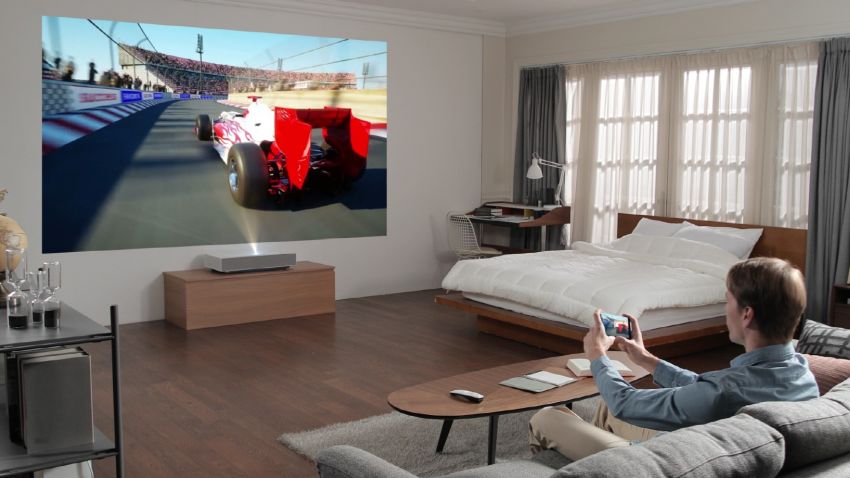 LG announced its CineBeam 4K (HU80K) laser projector at CES last year. At the upcoming 2019 event, LG’s upgraded HU85L model with Ultra Short Throw (UST) technology will make a debut. Featuring a subtle and compact design, it can match different interior styles and can project 4K images on any flat surface whether it’s a wall, floor or ceiling.

Due to the integrated UST technology, the LG HU85L CineBeam Laser 4K projector can be placed a little more than two inches from the wall to project a 90-inch diagonal image. And when placed seven inches away, the projector produces a much larger and a bigger 120-inch image.

It can reproduce highly accurate colors thanks to its wide color gamut, which further enhances the practicality of every picture displayed. It features multiple connectivity options, including USB, Ethernet, and HDMI, and can stream movies and shows from different Over-the-Top applications.

Furthermore, the inclusion of LG’s ThinQ AI makes the 4K projector more convenient and smart. Users can control the operations of the projector with voice commands to Google Assistant built-in using included Magic Remote and even control the other compatible smart home devices. The remote also recognizes gestures and features backlit buttons which automatically turn on with motion.

The new CineBeam Laser projector marries spectacular 4K viewing experience with the convenience of AI technology. There is no other product like this on the market, illustrating how LG continues to deliver unique value to consumers.

LG has won CES 2019 Innovation Award for the new HU85L CineBeam Laser 4K projector. If you wish to experience the projector for real, it will be on display during CES 2019. 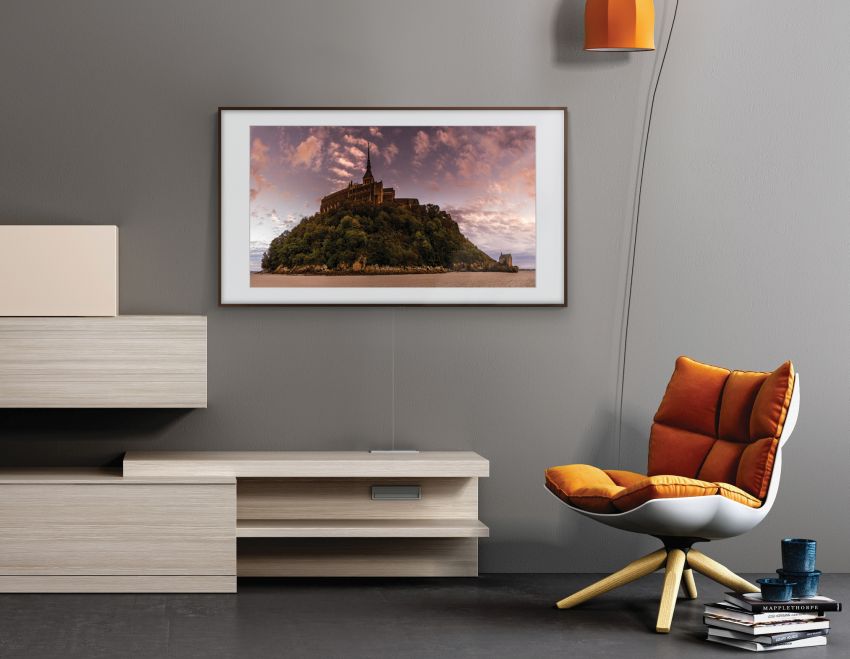 The consumer electronics giant Samsung is bringing QLED technology and other smart features to its flagship lifestyle TVs. Up till now, Samsung’s Q-series of TVs utilized the Quantum Dot technology, however, Samsung will be adding QLED panels to The Frame and The Serif TVs, making them emit exquisite picture quality.

The Frame is Samsung’s most unique TV that doubles as a piece of artwork. The new Frame TV will feature QLED panels, in addition to Bixby voice assistant, allowing users to control the TV and access streaming platforms like Netflix and Rakuten with voice commands. Samsung has made collaborations so that the new smart QLED TV can display paintings and pictures from famous galleries and museums around the world.       END_OF_DOCUMENT_TOKEN_TO_BE_REPLACED 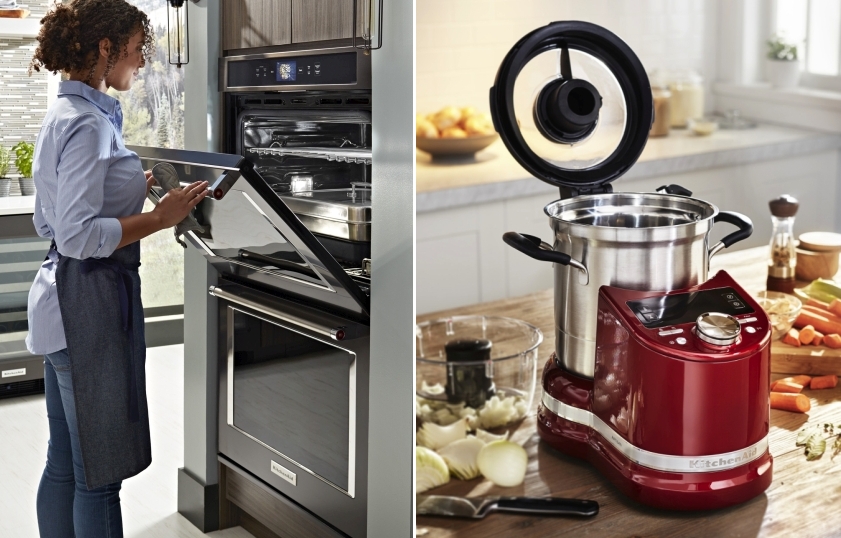 At CES 2019 Whirlpool Corporation will showcase a number of home technologies for a connected ecosystem. The smart home product lineup is going to be delivered under its four brands – Whirlpool, KitchenAid, WLabs, and Yummly. This promises new possibilities in culinary, cooking and laundry for homeowners who demand the next level of smart living. END_OF_DOCUMENT_TOKEN_TO_BE_REPLACED

Check CES 2019 for complete coverage of the biggest tech show of the year at Homecrux.